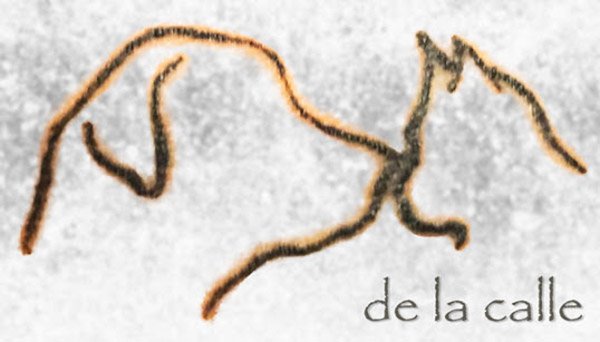 A dedicated group of Cuban community volunteers and veterinarians have come together to rescue hundreds of kittens, puppies, cats and dogs from the streets of Havana, a significant problem in Cuba. It’s called Project “De La Calle” (From the Street). 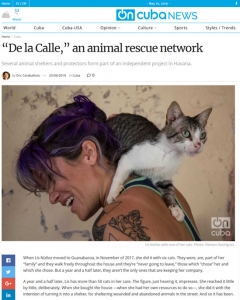 A news article was recently published about the “De la Calle” project and we hope you’ll take a few moments to read it. It features the hard-working Cuban volunteers — who can barely feed themselves — doing their best to purchase food, medicine and other supplies and continue their daily efforts to help these animals. This project is obviously different from what Ocean Doctor typically supports, but we were so moved and impressed with the good people of “De la Calle” that we decided to do our best to help them succeed in their difficult efforts. 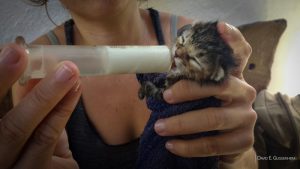 Nothing is as inspiring and comforting as seeing each animal we save here. – Lis Nuñez, Project Director

Cuba has a significant problem with abandoned and stray dogs and cats. It’s not uncommon to find a litter of helpless kittens or puppies left in a park or dumpster. There are no subsidized spay and neutering programs. Taking your dog or cat to a veterinarian is expensive for a Cuban, and surgery to have an animal neutered can set you back nearly a month’s salary. There are no governmental programs or agencies to deal with stray and abandoned animals, nor are there Cuban equivalents to the Humane Society to deal with it. 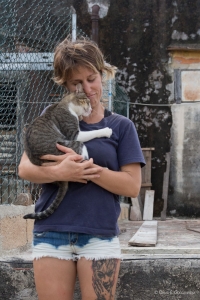 Fortunately, there is a small group of Cuban veterinarians and private citizens have come together, doing their best to address this problem. They call their volunteer organization, “De La Calle” (From the Street). Without the resources for even some of the most basic equipment, like surgical gloves, medicines and suture, it’s impressive what they’ve been able to do. These dedicated individuals work to rehabilitate and treat these animals, neuter them, find homes for them and educate the public. Little by little, neighborhood by neighborhood, their efforts are educating and inspiring others to chip in. 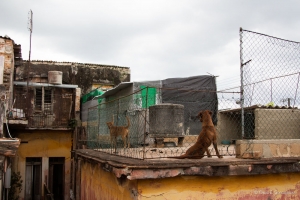 De La Calle has two shelters: One for kittens and cats, the other for puppies and dogs. You don’t have to look far in Havana to find an abandoned litter of kittens — perhaps in a public park, sometimes in a dumpster or trash can. De La Calle director, Lis Nuñez took dozens of kittens into her home as a temporary solution, but caring for so many animals soon made her home unlivable for her. With help from Ocean Doctor supporters, they were able to build a modest rooftop animal shelter for cats and kittens and enlist the help of volunteers from the area to care for, feed and clean up after them. With help and training from volunteer veterinarians in Havana, they have been able to treat these animals for disease and other ailments and rehabilitate them to good health. And, of course, they’re finding permanent homes for these animals.

On the outskirts of Havana is the second De La Calle shelter, this one for puppies and dogs, run by a very special volunteer veterinarian, Maylin and her two sons, both of whom aspire to be veterinarians some day. They enthusiastically help feed, clean and give their love and attention to these animals. Together with her husband, also a veterinarian, and her two sons, they have rescued dozens of puppies and dogs, brought them back to health and have found loving homes for them. 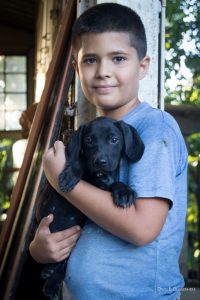 One of Maylin’s sons with a rescued puppy

Maylin, who lives on the outskirts of Havana, is one of those special veterinarians who returns home after a long, exhausting day at the clinic to a back yard full of abandoned dogs that she has taken in and cares for. Fortunately, her two sons, who aspire to be veterinarians themselves, help her with the formidable task of feeding, cleaning and loving these animals. (Right: One of Maylin’s sons cares for an abandoned puppy.) Together with her sons and her husband, also a veterinarian, they have rescued countless animals. 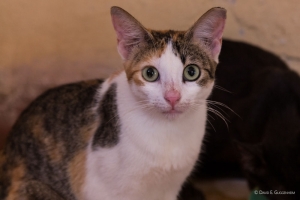 Cats and dogs aren’t included in Ocean Doctor’s mission statement — we focus on coral reef ecosystems and animals living in salt water. But we couldn’t ignore this inspiring effort by Cubans to make a difference in their community. At its essence, conservation is about helping people solve problems in their communities. Our work in the community of Cocodrilo on Cuba’s Isle of Youth precisely embodies that. We can’t possibly hope to help that community protect coral reefs unless we help them find economically- and environmentally-sustainable alternatives to fishing.

The Cuban volunteers that have banded together to help address the cause of abandoned and stray animals need your help. Funds for food, medical equipment and other supplies are prohibitively expensive for the average Cuban with a salary of $15-$25 per month. We hope you’ll consider helping us help the hard-working volunteers of “De La Calle” solve a serious problem in their community, and help people like Lis and Maylin who continue to sacrifice — with the help of their volunteers — to rescue, rehabilitate and find homes for these animals while working on ways to eliminate the problem altogether. Your donation to Ocean Doctor will help their efforts.

A Public Health and Environmental Risk

The program is also focused on a major human health hazard: The increasing number of stray cats and dogs living in the streets. Without any government support the volunteers of this civil society program are seeking to deal with this public health issue while, as a secondary benefit, providing humane care for these abandoned and/or stray animals.

The risks to humans from stray cats and dogs are well-documented in the scientific literature.[1] Among the diseases that are carried by stray cats and dogs that are transmitted to humans include rabies[2]; cat scratch disease (Bartonella henselae)[3],[4]; toxoplasmosis (Toxoplasma gondii); roundworms (which can cause a disease in humans known as visceral larva migrans, caused by Toxocara canis from dogs and Toxocara cati from cats); ringworm (fungal disease)[5]; plague (bubonic) caused by bacterium Yersinia pestis.[6]

A 2014 study focused on the Mediterranean and Middle East states, “Uncontrolled urban growth …involves city dwellers and stray animals (mainly dogs and cats) creating a dense and downgraded environment, in which irregular street garbage collection disposes sufficient food for survival and proliferation of stray animals. Under such conditions serious public health hazards are expected due to the increase of animal bites, the multiplication of insects and rodents vectors of different viral, bacterial, fungal and parasitic agents to which humans are exposed.”[7] In Mexico stray dogs are contributing to the significant contamination of public areas.[8]

According to the World Health Organization, “Dog bites account for tens of millions of injuries annually; the highest risk is among children. Rabies is a significant health concern following dog bites, cat bites.”[9]

In Cuba (and much of Latin America, including Mexico[10]), as in much of the rest of the world, the growing number of stray cats and dogs present a grave public health risk to the human population. Controlling the number of stray animals depends upon capturing, inoculating and neutering these animals. It also involves the construction of shelters and the use of volunteers organized by community members as the government has no programs in place to deal with this issue. Finally, it involves educating the public on the issue, preventative issues, and in some cases, educating volunteers in veterinary practices, including providing inoculations and neutering.

Many Cuban pet owners can simply not afford to inoculate and/or neuter their pets as the cost of veterinary care – which can be a month’s salary – is prohibitive. Their pets reproduce with stray animals, exacerbating the problem. Further, the volunteers of De La Calle have little or no outside support and the care, feeding and medical care for these animals comes at great personal sacrifice.

Ocean Doctor’s support will assist with providing various supplies (educational literature, medical supplies, food) as well as educational workshops including experts from the U.S. Support will also include construction of small animal shelters (and improvement of existing ones) within the De La Calle network where stray animals can be treated and either released or adopted once treated and neutered. 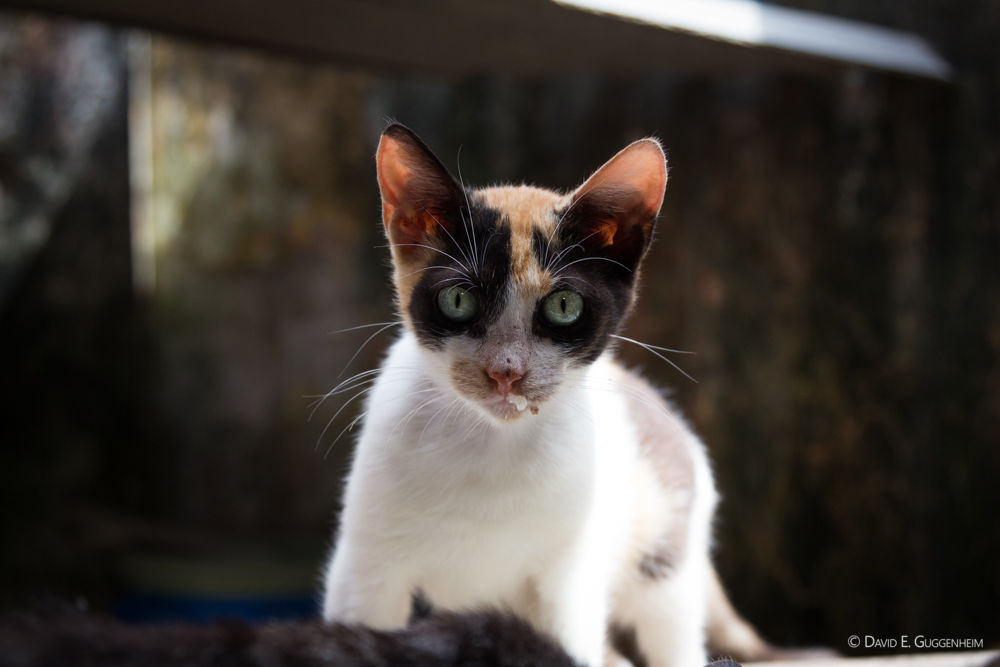 Feeding and providing medicine for 50 kittens and young cats is exorbitantly expensive for the Cuban volunteers of De La Calle, considering that the average Cuban salary is $15 per month. Currently, Ocean Doctor is their only source of financial support.

Our work is difficult and urgent. It’s your support that makes our work possible. Please help Ocean Doctor continue its work to protect coral reef ecosystems — and sometimes, kittens and puppies. Your donation will go directly to support the Cuban volunteers caring for abandoned and stray kittens and puppies as part of Project “De La Calle”

Ocean Doctor is a 501(c)(3) nonprofit organization. Your donation is eligible to be tax-deductible in the U.S. 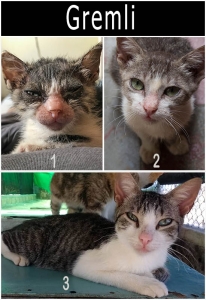 Learn more about this inspiring project in the article, Why I Must Wear Long Sleeves on Earth Day. We thank everyone who has supported this small but important effort by a group of dedicated volunteers and veterinarians in Cuba.