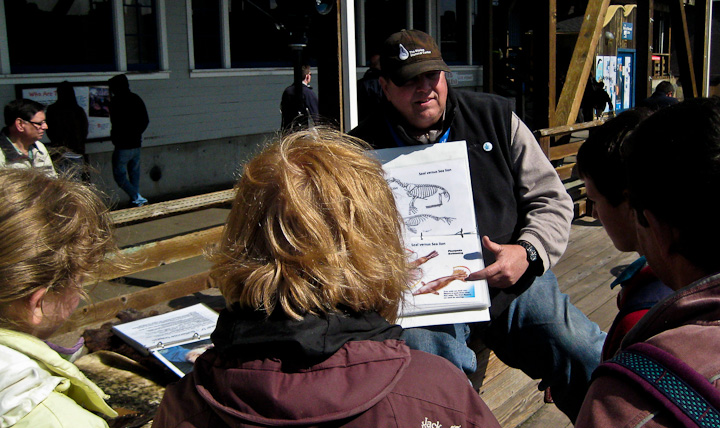 April 25, 2011: Take a walk out to the end of San Francisco’s Pier 39, and you’ll hear an interesting symphony of barking California sea lions and reactions of delight and amusement from droves of human onlookers. And if you’re lucky, you might also find the “Gentleman Biologist of Pier 39,” Tim Vogel, a volunteer at the Marine Mammal Center in Sausalito, who has pursued tech career in Silicon Valley but has never forgotten his Seacamp roots. He spends hours teaching and inspiring visitors about the incredible wildlife of the West Coast and the wonders of science. Also: An update on the penguin rescue effort from Tristan da Cunha by Trevor Glass, Director of the Department of Conservation there.

The Gentleman Biologist of Pier 39 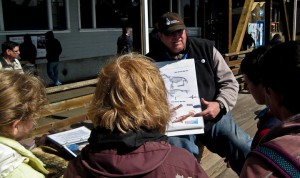 Timothy Vogel, the “Gentleman Biologist of Pier 39,” a Docent for the Marine Mammal Center, talks with young visitors about the area’s whales, dolphins, seals and other marine mammals

I’ve known Tim Vogel for many years — since the late seventies. We worked together at Seacamp, a marine science camp in the Florida Keys. If you listen to this show regularly, you’re probably starting to think that Seacamp is some sort of cult the way many of us ex-Seacampers have stayed in touch all these years and reminisce with wide eyes about our days there. Well, OK, I guess it is sort of a cult, but a damn fine one.

Not all of us have gone on to be marine scientists, but so many of us who were there in our younger days still have in our hearts a powerful love for the oceans and appreciation of the importance of educating others about their beauty, wonder and vulnerability. We often joke that we often find ourselves going back into teaching mode at the drop of a hat. A few years ago, when our fight was delayed in Dutch Harbor, Alaska, I found myself giving an impromptu PowerPoint presentation to the fishermen in the boarding area, holding up my laptop with one hand and gesturing enthusiastically with the other! I think many of us have stories like that. 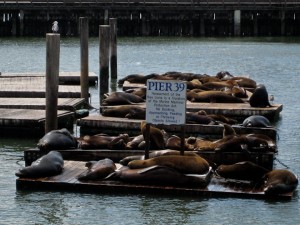 Tim is another perfect example of a Seacamper who never stopped teaching. His career took him in fascinating directions, in software engineering and data mining, and areas that, quite frankly, despite my geeky nature, I don?t fully understand at all. He’s worked for years in Silicon Valley, has built small companies, sold software to Microsoft and others with great success. But his passion for the oceans and Mother Nature remain strong, which is why several times a week, you’ll find him today at the northwest corner of San Francisco’s Pier 39, adjacent to a noisy group of California sea lions who began hanging out here more than 20 years ago. He’s a volunteer docent for the Marine Mammal Center in Sausalito, which maintains a presence on Pier 39 to engage the throngs of tourists and enlighten them about sea lions, whales, dolphins and the other rich marine mammal wildlife of the California Coast. 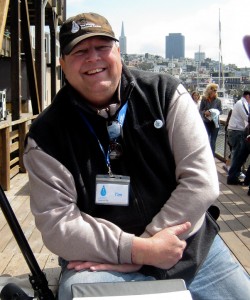 Volunteers like Tim earn a special place in my heart. When I ran The Conservancy of Southwest Florida, we had hundreds of volunteers, and working with them is what I miss the most about being there. I was so humbled by their selfless dedication to education and conservation. Tim’s no exception. It’s obvious to anyone watching him for just a few minutes that he absolutely loves what he’s doing. But it’s more than that. He’s clearly a voracious reader and over the years it’s apparent that he’s thought long and hard about science, our species and our fellow species, and how we all fit together on this planet. I hadn?t seen Tim in many years, and though we’ve stayed in touch online, it was wonderful to see him again and talk with him, which is why I wanted to share my visit with the “Gentleman Biologist of Pier 39” with all of you.

About the Marine Mammal Center

The Marine Mammal Center is a nonprofit veterinary research hospital and educational center dedicated to the rescue and rehabilitation of ill and injured marine mammals — primarily elephant seals, harbor seals, and California sea lions. Since 1975, it has been headquartered in Sausalito, CA in the Marin Headlands within the Golden Gate National Parks, and has rescued and treated more than 16,000 marine mammals.

During rehabilitation of the animals, its research team studies the causes of their illnesses and by doing so, learns about conditions affecting the health of marine mammal populations and the oceans ? conditions that can affect humans as well. The Center’s core research includes studying domoic acid poisoning in sea lions, bacterial infections such as leptospirosis, and even cancer, which is found in approximately 17% of adult sea lions that undergo post mortem at its hospital.

The Center’s education programs teach nearly 30,000 students and adults each year about marine mammals and the urgent need for environmental stewardship of earth’s marine environments, with the goal of inspiring ocean conservation. Its school programs are designed to meet the California State Academic Standards for science. Additionally, the Center’s Youth Volunteer Program provides younger ocean stewards with hands-on experience as volunteers working on animal care crews or as education docents.