April 4, 2011: Our guest this week, penguin expert, Dyan deNapoli, “The Penguin Lady,” former Senior Penguin Aquarist at the New England Aquarium, talks about her new book, The Great Penguin Rescue. with important lessons — and hope — for the desperate penguin rescue and rehabilitation efforts underway following the tragic oil spill at Nightingale Island in the South Atlantic. Also: An update on the rescue effort from Tristan da Cunha by Katrine Herian of the Royal Society for the Protection of Birds. 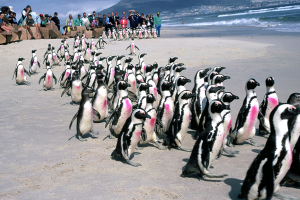 On June 23, 2000, a ship foundered and sank off the coast of Cape Town, South Africa, directly between the main breeding colonies of the African penguin, threatening approximately 75,000 penguins, more than 40 percent of the world’s population. Within hours after the ship sank, heavily oiled penguins began to stream ashore onto nearby islands and beaches. Chicks left in the breeding colonies would slowly starve to death. The overwhelmed penguin rehabilitation center in Cape Town put out an international call for help to the zoo and aquarium network, and Dyan deNapoli, former Senior Penguin Aquarist at the New England Aquarium, was among the first group to arrive. In her book, The Great Penguin Rescue: 40,000 Penguins, a Devastating Oil Spill, and the Inspiring Story of the World’s Largest Animal Rescue, deNapoli gives a firsthand account of the rescue of the oiled penguins and, as one reviewer put it, “plunges the reader into the maelstrom of animal rescue and rehabilitation on such a large scale.”

Dyan deNapoli’s experiences from a disaster a decade ago bring important lessons ? and hope ? for the desperate penguin rescue and rehabilitation efforts underway at Tristan da Cunha, Nightingale Island and Inaccessible Island following the March 16, 2011 wreck of the MS Oliva and resulting oil spill.

About Dyan deNapoli, “The Penguin Lady” 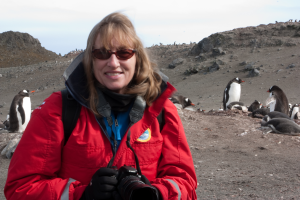 Dyan deNapoli is a penguin expert, educator and author of The Great Penguin Rescue, which chronicles the remarkable rescue of 40,000 penguins from the Treasure oil spill in South Africa. After working closely with penguins at Boston’s New England Aquarium for nine years, she founded her company, The Penguin Lady, to teach audiences worldwide about the biology, behavior, and conservation of these unique seabirds. She has been a lecturer on nature cruises to Antarctica and the Galapagos Islands and, since 1995, has taught roughly 250,000 people about penguins. She has been the featured guest on numerous television and radio programs in the US and abroad, and will be a TEDxBoston speaker in June of 2011. Dyan is donating 20% of the proceeds from her book to penguin rescue groups. 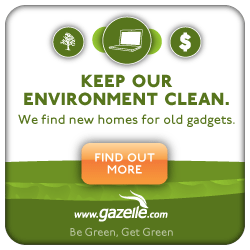 Aboard the Cape to Cape Expedition: In Shackleton’s Footsteps on South Georgia Island

The Ocean Revolution is Underway!
1 reply