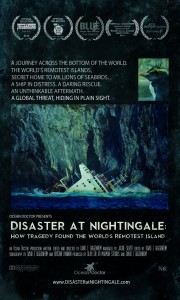 While on an expedition in the South Atlantic from the tip of South America to the tip of South Africa, marine scientist  witnessed – and filmed – the worst environmental disaster of his life. En route to a little-known cluster of islands, his ship received a distress call, requesting assistance in rescuing the crew from a Maltese freighter that had somehow managed to run aground at Nightingale Island, part of what is considered the most remote inhabited island group in the world, Tristan da Cunha. The wreck unleashed a catastrophic oil spill at the doorstep of the second largest concentration of seabirds in the world, home to 65 percent of the world’s population of the endangered Northern Rockhopper penguin. Beloved and iconic, it is a surprise to many that most penguin species are in trouble and have declined by as much as 90 percent since the 1950s. Equally surprising is a growing global threat, hiding in plain sight: The common cargo vessel, whose dismal safety record is proving over and over again that it doesn’t take a supertanker or oil well blowout to create an oil spill disaster. Disaster at Nightingale is a film about an ecological catastrophe that few know occurred, in a place that few know exists, resulting from a global threat that few are aware of. The film reveals why the disaster occurred, its unthinkable aftermath, and how such “statistically impossible” disasters aren’t nearly as impossible as we once thought.

“More than films, more than a celebration of all things wet, the Blue Ocean Film Festival brings together a potent mix of artists, scientists, conservationists, decision makers, industry leaders, inquisitive teachers, lively kids and more. Come to be in the company of kindred spirits and make useful contacts. Come to be entertained, or inspired, or informed. Come to have a good time. Whatever strums your blue heartstrings just don’t miss out.” -Dr. Sylvia Earle Founder Mission Blue, SEAlliance and a National Geographic Explorer in Residence