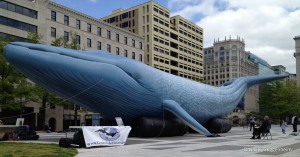 Join Dr. Sylvia A. Earle, Founder, Mission Blue/Sylvia Earle Alliance, along with Dr. David E. Guggenheim, the “Ocean Doctor” (president of Ocean Doctor and Board Member of the Great Whale Conservancy), with Michael Fishbach and Dr. Gershon Cohen, Co-Directors of the Great Whale Conservancy, for a unique Earth Day event on Tuesday, April 22nd, 2014 (Earth Day) at 2pm ET on the Ellipse below the South Lawn of the White House in Washington, DC.

Purpose:  To ask President Obama to direct the Navy to remove its objection to the use of an alternate shipping lane in California waters to reduce the killing of blue whales from ship strikes.

Blue whales may be the largest animal to ever live on Earth, and they are remarkably intelligent and agile, but they are dwarfed by these ships which are usually unaware a strike has even occurred. No one knows why the blue whales are often unable to avoid the ships, it might be due to the noise from multiple vessels or because they are so focused on feeding – blue whales must consume tons of krill every day to survive.

There is an alternate shipping route, supported by the Coast Guard, which if used during the four critical months of July-October could reduce the number of ship strikes on blue whales by 80-90%.  Members of the industry have stated their willingness to consider using an alternate shipping lane if the Navy’s objection is dropped.

Great Whale Conservancy will be submitting a letter to the White House regarding this matter signed by NGO’s working around the world to protect whales, along with ~120,000 signatures from an on-line petition.

The Ellipse, Below the South Lawn of the White House
Washington, DC 20502 United States + Google Map

The Ellipse, Below the South Lawn of the White House
Washington, DC 20502 United States + Google Map

Advancing Collaboration between the United States and Cuba in Marine Science and Conservation Scroll to top
Cuba Travel Program Reviews
Get Involved with the Cuba Environmental Film Festival!