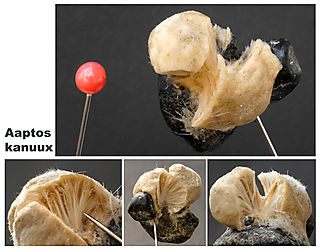 It’s hard to get a big smile out of Ken Lowyck, Greenpeace’s capable Action Unit Coordinator (and sub pilot) based in Toronto. I snapped the photo to the right and captured Ken’s pre-dive excitement last summer on August 1, just minutes before he was launched on the dive to 700 feet in Pribilof Canyon in the Bering Sea that resulted in one of the expedition’s most important discoveries. I imagine the modest smile that appeared on his face has returned today as Greenpeace has announced that the tiny, unassuming white sponge he retrieved on that dive was never before documented by Homo sapiens, and may well herald future announcements of other new species from the expedition. The sponge was named Aaptos kanuux, the word “kanuux” being the Aleut word for “heart,” in honor of the Bering Sea’s canyons, considered to be the heart of the Bering Sea by the region’s natives who depend on their font of life to sustain their way of life. It was also the first time the genus Aaptos has ever been documented in the Bering Sea. The painstaking work of analyzing hours and hours of video and hundreds of retrieved samples continues and will likely continue for years, as science soldiers on. I’m certain we can expect more dramatic news as the effort continues. I was reunited with one of my fellow sub pilots last week when I shared breakfast with John Hocevar, Greenpeace Senior Ocean Specialist. Though the restaurant wasn’t pitching and rolling like Esperanza, it felt as though the expedition was very much still underway as we talked, that our collective voyage of discovery was far from its conclusion, and the latest news from John confirmed it. He told me that half of the 14 deep sea corals documented during the expedition were never before seen in the Bering Sea. Nor were two thirds of the 20 or so sponge species documented. And the expedition provided the first record of black coral of any kind and the first record of stony coral (also known as Scleractinians — see the photo below right) in the Bering Sea. NOAA biologist Robert Stone participated in the expedition and co-authored a recent paper with Greenpeace scientist John Hocevar presented the new findings at the Alaska Marine Science Symposium. You can see a copy of the report online.

The expedition was undertaken to collect information needed to inform conservation policies by the North Pacific Fisheries Council. The expedition team documented numerous examples of extensive damage to corals by fishing trawlers, which essentially clearcut the bottom with their nets. It’s hard to express the scale of what we observed,nwhich, even in Hi-Def video, can’t begin to convey the scale of destruction. It’s almost comical to listen to the audio of the tape of one of my dives, where I excitedly radioed to the surface that I’ve landed at 1,000 feet in some sort of geological relief, a conclusion I drew when I saw what appeared to be a long ridge in front of me. After ascending a few feet to get a better perspective, the horror of what I was looking at set in — I had landed squarely in the middle of a miles-long trawling scar, a scar that left virtually nothing living on the bottom and that left a swath nearly half the size of a New York city block of uplifted sediment…my so-called “ridge.”

John also shared with me the challenge he’s had in presenting these data at North Pacific Fishery Management Council. In late 2006, they claimed that they didn’t have enough data to justify any special designation for the Bering Sea Canyons, areas they prioritized for research at the same meeting. This inspired the 2007 expedition undertaken by Greenpeace, but returning with compelling data, photos and video in hand has done little so far to advance any change in mindset by the Council. Failure to take action to protect natural resource on the basis of too little information is so 20th Century. Surely the best policies err on the side of conserving valuable resources when information about their status is scarce. I’m confident that the compelling results of this expedition will speak loudly on their own and science will guide humanity’s hand accordingly.

So for now, I revel in the joy of discovery, and like Ken, I smile with the satisfaction of helping to advance humanity’s knowledge about a mysterious and fantastic world below, and with the anticipation of the voyages ahead…

The New Green is Blue: David Guggenheim Featured on “Philadelphia Age... Dramatic Discoveries in the Bering Sea: ExpeditionDispatch from 1planet1ocean...
Scroll to top