The Remarkable Reefs of Cuba: Hopeful Stories From the Ocean Doctor

Cuba’s remarkably healthy reefs offer hope to a world of corals facing extinction. Understanding why takes us on a journey through the island’s unique history – and our own. 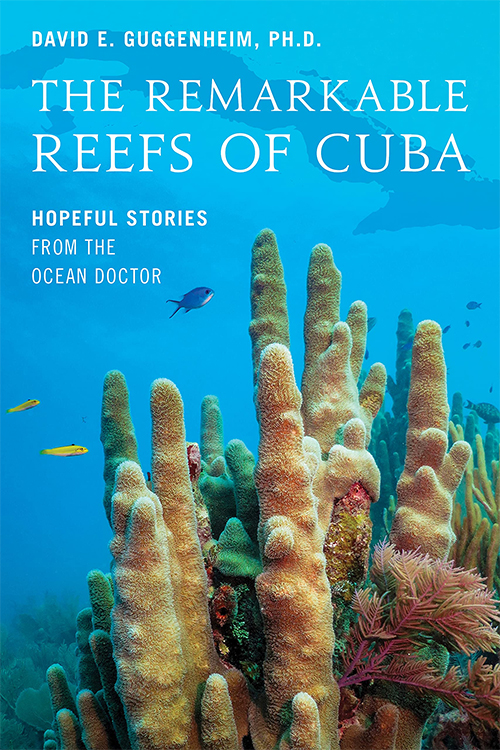 From Prometheus Books, an imprint of Globe Pequot, the trade division of The Rowman & Littlefield Publishing Group, Inc. we are proud to announce the new book by Ocean Doctor founder and president, Dr. David E. Guggenheim: The Remarkable Reefs of Cuba: Hopeful Stories From the Ocean Doctor.

Since 1970, the Caribbean has lost half its coral reefs, an ominous and accelerating phenomenon reflected around the world. Beyond the heartbreak of the loss of such exquisite beauty, losing coral reefs means the annual loss of billions of dollars from the global economy and the end of a way of life for the billions who depend on these ecosystems.

Marine scientist and conservation leader Dr. David E. Guggenheim has had a front-row seat to this disaster. But when he began a new chapter of his career in Cuba, he found something completely unexpected: hope. After years of watching reefs deteriorate, Guggenheim was astonished to come face-to-face with Cuba’s remarkably healthy coral reefs overflowing with marine life. The Remarkable Reefs of Cuba reveals the hidden lessons of Cuba’s reefs that could help rescue coral reefs around the world.

While the past 60 years have seen the worst decline in ocean health in human history, Cuba’s oceans and coral reefs remain remarkably healthy, a living laboratory little seen by this generation of scientists. Which begs the question—Why are Cuba’s ocean waters so healthy? The answer is deeply entwined with the country’s extraordinary and singularly unique history, from its dramatic political past to its world-class environmental protections influenced by an unlikely partner, Jacques Cousteau.

The Remarkable Reefs of Cuba tells the story of the demise of the world’s ocean ecosystems, the hard work of those trying desperately to save it, and an unexpected beacon of hope from an island full of mystery and surprise.