I must have looked silly on the first Earth Day. I was in elementary school and had the coveted honor of being allowed to wear the janitor’s rubber boots. As one of the shortest kids in our class, the boots reached my crotch…and then some. I waded into the small creek that ran behind Shoemaker Elementary School in the Philly suburbs. Trudging with a Frankenstein-like walk in my mammoth boots, I began to clean up trash. It was exhilarating. For the first time in my young life I felt magically connected to a cause, one shared by millions. It was an event that I could never imagine I would still be involved with decades later. Back then we rallied around nature as a vital and ethical cause in an era when pollution choked our skies and rivers with virtual impunity.

Years later I would find myself testifying before county commissioners, city councils, state legislatures, congress, parliaments and various international bodies. But if my testimony dared to stray into the ethical realm we embraced on that first Earth Day – of protecting nature for its own sake – eyes would roll. Commissioners, congressmen or city council members would immediately tune out. In that moment I’d lost their attention to more important matters, like sending texts. I resented it but finally came to understand — and accept — that the playing field for environmental decisionmaking is dominated by economics. “How much will protecting the environment cost? How many jobs will be lost?” The mindset that protecting the environment is a cost – not a benefit – persists to this day in politically charged debates. But at last that’s been changing, and I’m happy to say that there are bold new changes afoot.

For too long, the environment side of the ledger was blank. Dumping waste into the environment was virtually cost-free. So was extracting minerals or fish. Thankfully, the field of “environmental economics” was born, a science that helps determine the economic value of the remarkable number of services the environment provides for us. For example, every other breath you’re taking as you read this is courtesy of the phytoplankton that live in our oceans. That’s worth some coin. 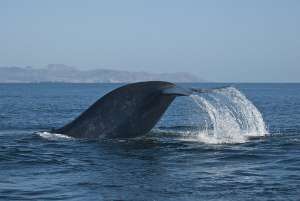 A blue whale – the largest creature to ever inhabit Earth. It is worth millions just for the amount of carbon it sequesters from the atmosphere. (Photo: Craig Hayslip/Oregon State University Marine Mammal Institute)

Dr. Ralph Chami and I might seem like two people with nothing in common. He’s Assistant Director at the International Monetary Fund (IMF). I, on the other hand, hang out with fish and corals. But several years ago, our mutual love of and work with whales drew us together. In 2019, it was more than a surprise to many that the IMF published an article on, of all things, blue whales. Ralph and his colleagues demonstrated just how valuable whales are. And their poop? Why it’s simply priceless. It fertilizes the growth of phytoplankton which, in turn, sequesters carbon. A single whale is worth millions, much of that owing to their powerful role in sequestering carbon from the atmosphere. Considering the number of whales that used to roam the seas before we slaughtered them, the quantity of carbon sequestered was enormous. 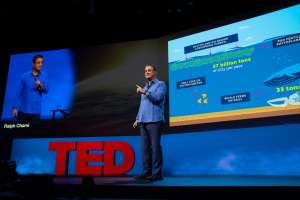 Last week, Ralph presented at TED 2022 about the astounding economic value of keeping whales and elephants and mangroves and other creatures and ecosystems healthy, and the value of living nature to sustainable development. Traditional carbon sequestration projects treat carbon offsets as a cost to a company seeking to offset its carbon emissions on the way to becoming carbon neutral. Ralph’s approach, one we embrace, draws in part from his many years at IMF. This approach has transformed carbon offsets from a cost into an investment — an investment that pays a return to the investor.

Ralph founded a new company, Blue Green Future, and Ocean Doctor is proud to be a partner. Together we’ve already completed a pilot study in the Western Everglades showing that the cost of restoring parts of Southwest Florida’s mangrove ecosystems can be reduced by private investment in the carbon credits made possible by the restoration. No new taxes. No new regulations. No cost to the local, state or federal governments. It’s an investment with a return and the resources are protected in perpetuity. The playing field may still be economics, but the ball has just moved far down the field.

An exciting new chapter for conservation and restoration is upon us. This new approach isn’t just about economics, spreadsheets and investors. It’s also about building strong, economically sustainable communities, with incentives to protect – not exploit – their local ecosystems. And it’s also about the awe and love of the creatures that inhabit this planet, like the wonder felt by a little boy in oversized boots on a sunny Wednesday in April 1970, a day called “Earth Day” that for decades ahead would unite children and adults around the world in their celebration of a planet that still teems with life and hope.