Already, the Greenpeace-led team has accumulated nearly 16 hours of bottom time (8 hours per sub), more than all of the previous research done in this region combined. The subs’ high-definition video cameras have already collected over 120 Gb of data. The subs are performing linear transects which will then be analyzed on the video. Twin lasers spaced 20 cm apart allow accurate analysis of the size of organisms encountered. END_OF_DOCUMENT_TOKEN_TO_BE_REPLACED 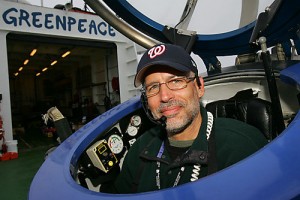 When I used to teach marine science at Seacamp, a wonderful marine science camp in the Florida Keys, I always tried to impress upon my students (especially the ones reluctant to get into the water) that I always saw something new every time I went diving or snorkeling. This axiom has held true my entire life, but with a submarine and the deep waters it reaches, it seems that I see something new every 5 minutes. END_OF_DOCUMENT_TOKEN_TO_BE_REPLACED 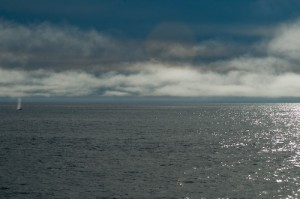 Humpback Whale Sounding on the Way to Pribolof Canyon

We departed Dutch Harbor at 4pm Alaska Time today. It’s after 11pm now, still plenty of daylight, as we head north to Pribolof Canyon for our first dive in the morning. I’ll be one of the pilots, so I hope to get some sleep soon. As we headed north away from the Aleutians, there was a steady stream of announcements from the bridge over the intercom: “Whales, port side. Whales, starboard side. Whales, off the bow.” Humpback whales in groups of ten. We also saw fin whales. END_OF_DOCUMENT_TOKEN_TO_BE_REPLACED

In June, an international team of researchers and conservation specialists recently completed a week of intensive training and preparations for this Greenpeace-led expedition to Alaska’s Bering sea. The Esperanza is carrying two manned submersibles, a remotely-operated vehicle (ROV) and the research team to the Bering Sea for a three week survey of Zhemchug and Pribilof Canyons, specifically to map and document deepwater corals living at depths of more than 1,000 feet. END_OF_DOCUMENT_TOKEN_TO_BE_REPLACED 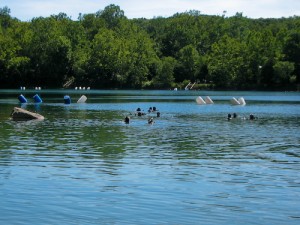 As a young teenager, I finally got my wish: Scuba lessons for my 15th birthday! My lessons were in a moldy YMCA pool in suburban Philadelphia, and my first open water dive — my checkout dive — was in a quarry in Reading, Pennsylvania in the balmy month of December. Air temperature 36 degrees F, water temperature 40 degrees. My wetsuit was too big, was full of holes, and to this day I don’t think I’ve ever been so cold. In those primitive days of the early 70s, we didn’t use buoyancy compensators (BCs), vests that you can fill with air from your tank to keep you afloat at the surface or keep you neutrally buoyant at depth. Rather, we used “horse collar” safety vests — virtually identical to what the flight attendant demonstrates the use of for the “unlikely event of a water landing.” END_OF_DOCUMENT_TOKEN_TO_BE_REPLACED

Last week, Mirriam-Webster’ announced that it was adding the word, “ginormous” to its 2007 update of Merriam-Webster’s Collegiate Dictionary, Eleventh Edition. This is great news and comes as a great relief, just in time for next week’s kickoff of the Bering Sea Expedition. For ever since I first visited Alaska, I have found an utter deficit of adjectives to adequately convey the state’s enormity — er, ginormity. END_OF_DOCUMENT_TOKEN_TO_BE_REPLACED 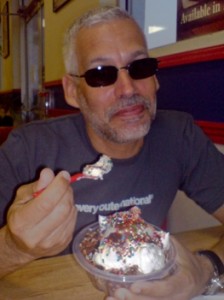 In the 100-degree heat here in Washington, DC, the daily weather reports from Dutch Harbor, Alaska showing highs of 50 degrees seem surreal, yet in just over two weeks, that’s where I’ll be as we kick off the Bering Sea Expedition aboard Greenpeace’s magnificent ship, M/V Esperanza. In recent years, virtually all of my time aboard ships on research expeditions has been in the Gulf of Mexico and Caribbean, so my wardrobe consisted of little more than a couple pairs of shorts and some thoughtfully-selected marine-themed T-shirts. But Alaska is different, and the Bering Sea is different still. The cool temperatures, wind, and damp chill of the fog combine to mean only one thing: Shopping. END_OF_DOCUMENT_TOKEN_TO_BE_REPLACED