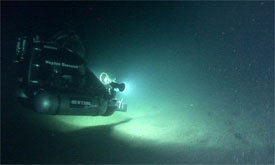 Already, the Greenpeace-led team has accumulated nearly 16 hours of bottom time (8 hours per sub), more than all of the previous research done in this region combined. The subs’ high-definition video cameras have already collected over 120 Gb of data. The subs are performing linear transects which will then be analyzed on the video. Twin lasers spaced 20 cm apart allow accurate analysis of the size of organisms encountered.

The tumbling anenome, Liponema brevicornis, photographed here by David E. Guggenheim on Saturday, July 27 at a depth of 620 feet in Pribilof Canyon (The two red dots are from onboard lasers used to assist in estimating size. The lasers are 20 centimeters apart.)

The Esperanza is carrying two manned submersibles, a remotely-operated vehicle (ROV) and an international research team to the Bering Sea for a three week survey of Zhemchug and Pribilof Canyons,to map and document deepwater corals living at depths of more than 1,000 feet. The expedition was conceived of and is being led by Greenpeace.

An Important Message from Ocean Doctor

Next-Generation Aquaculture: The Future of Fishing on Planet Earth

Choose Nausea or Sleepiness. Or Perhaps You’d Like Both?
Scroll to top