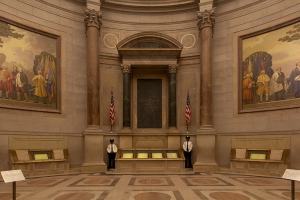 The U.S. Constitution beneath the Rotunda of the National Archives (Photo: Jeff Reed)

Exactly 2.22 miles from where I now sit, beneath the Rotunda of the National Archives, lies the original U.S. Constitution. Children, parents, grandparents, natives and immigrants, and visitors from around the world gaze at this historic document behind the glass to share a common often-emotional moment. Some weep.

Far more than a dry collection of laws, the Constitution forms the living heart, soul and enduring fabric of a nascent Republic that would grow and prosper far beyond the imagination of its signatories. Today it remains revered as something sacred, representing the unwavering commitments of how the Republic would remain true to its tenets, wherever the future journey may take the nation. 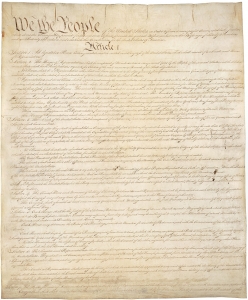 It has impressively stood the test of time since the signing ceremony in Independence Hall in Philadelphia, though amended over time to reflect the growth of our moral and ethical evolution and a changing world the Founding Fathers could not anticipate.

At the time of its signing, the colonies occupied only a fraction of the enormous North American continent and the vast western frontier was virtually unexplored. It sparked the imagination of many, a place that could offer promise and prosperity to those brave enough to set out west into the unknown. Sixteen years later, President Thomas Jefferson sent Captain Meriwether Lewis and William Clark to lead the Corps of Discovery to explore these unknown regions. After their unlikely survival and return, Jefferson imagined it would 100 generations for Americans to settle the West. His math was off by more than a factor of 10: It took only 8.

As the settlement of the continent grew, settlers survived off the vast populations of wildlife that flourished on land and in the sea. Even by the end of the 19th century, scholars believed such wildlife would sustain us indefinitely. 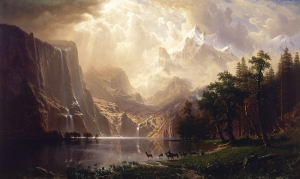 For a young republic where living off the vast wildlife of land and sea was the norm, it was largely unimaginable that such resources could be seriously impacted. Even at the end of the 19th century, biologist and anthropologist Thomas Henry Huxley stated, “…probably all the great sea-fisheries, are inexhaustible; that is to say that nothing we do seriously affects the number of fish. And any attempt to regulate these fisheries seems consequently…to be useless.” Surely, he couldn’t imagine the great fleets of factory ships in the Bering Sea that would eventually sweep tons of fish into their nets nor the great fishing pressures in New England that would eventually lead to the inconceivable collapse of the great cod fishery in the Northeast.

Nor could anyone of that era of such bounty imagine that a century later, our entire planet would be struggling with rapid and unprecedented human-created changes to our atmosphere, leading to a changing climate that would fundamentally threaten the prosperity, health and very survival of its inhabitants, both human and non-human.

In the world that existed when the Founding Fathers put feather quill pen to parchment, to have considered a healthy environment as a basic right of the citizenry might have seemed obvious but wholly unnecessary to include in the Constitution. More than two centuries later, a vast tangle of U.S. legislation seeks to protect the environment, but the Constitution – that fundamental foundation guiding our country to its future – remains silent on the Nation’s commitment to protecting and sustaining its natural environment – especially climate change – and the basic right of each citizen to a healthy environment in which to live, seek opportunity and raise a family.

Despite science that overwhelmingly demonstrates that climate change is caused by humans and represents one of the gravest threats to humanity and our planet, and that recent official U.S. reports point to the critical need to take immediate and meaningful action, our nation is paralyzed in absurd debates over the science, with many pointing to the costs of taking action and willfully blind to the much greater costs of inaction. We are far from fulfilling what is should arguably be one of the basic responsibilities of environmental protection to our citizenry, and the idea of enshrining such a commitment in our Constitution would seem to be absurd in this political climate of so-called “fake news” and abandonment of reason.

But while we delay and bury ourselves in endless debate and conflict, other countries are recognizing a healthy environment as a fundamental right of their citizens and doing so at the highest level: In their Constitutions. 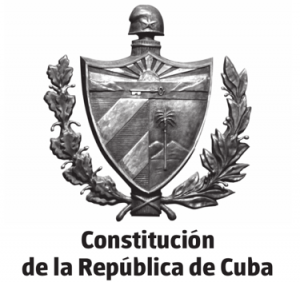 Cuba’s newly revised Constitution is an extraordinary commitment toward this end. Article 16 commits Cuba to a set of actions that “promotes the protection and conservation of the environment and the confrontation of climate change, which threatens the survival of the human species…” Cuba’s Law of the Environment, passed in 1997, already recognized that “it is necessary to consecrate as a basic right of society and its citizens, the right to a sound environment, and to the enjoyment of a healthy and productive life in harmony with nature.”

Cuba is not alone nor the first to embody a commitment to addressing climate change into its nation’s constitution. In 2014, the Constitution of the Republic of Tunisia was amended to include the following: “The State guarantees the right to a healthy and balanced environment and the right to participate in the protection of the climate.” In 2016, Zambia incorporated a constitutional amendment stating, “The State shall … establish and implement mechanisms that address climate change.”[1] 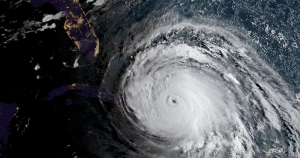 Cuba’s contribution to global greenhouse gases is miniscule but the impacts of climate change are enormous. North of Havana I have seen homes sliced in half by rising seas. Monstrous hurricanes have relentlessly attacked the island. For years Cuba has been deploying wind turbines, solar farms and biomass facilities across the island. It is moving its citizens out of threatened coastal zones to ensure their safety. Its latest commitment to a constitutional amendment represents example of a nation’s commitment to upholding its responsibility to the planet that other nations should heed. 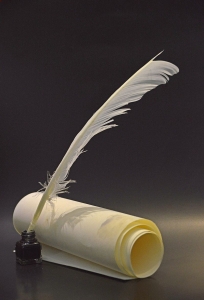 Today in the U.S. there is a growing movement, led by youth, claiming that there already exists a constitutional right to a livable climate. A lawsuit first filed in 2015 by 21 young people, Juliana v. United States is now being tried in federal court. The plaintiffs claim that harm caused by climate change threatens their basic constitutional rights as citizens.[2] The lawsuit is an uphill fight but one that reveals a promising trend, one of considering our most fundamental rights to include a healthy environment. The involvement of youth, who must inherit the consequences of our inactions, is equally a promising and inspiring trend.

Our Founding Fathers cannot be blamed for failing to foretell the future state of our nation’s — our world’s — environment. But with compelling science and recurring examples of the havoc climate change is already wreaking on our planet and people’s lives, today’s leaders have no excuse. A constitutional amendment may seem like an absurd quest in today’s bitterly divided United States, but history has taught us that the world – and our political views – do evolve. With the leadership of our youth – our future political leaders – perhaps the day when we formally recognize a healthy environment as a basic human right, and consequent commitment to addressing climate change, is not only possible, but also, perhaps, imminent.

Our work is helping Cuba fulfill its commitment to addressing climate change — especially with the preservation of coral reef ecosystems. We urgently need your support to continue this work.

Learn more about our work in Cuba to protect coral reef ecosystems.

VIDEO: Half the Caribbean’s Coral Reefs Have Died. Join Our Fight to Bring...

A Race to Save Coral Reefs
Scroll to top