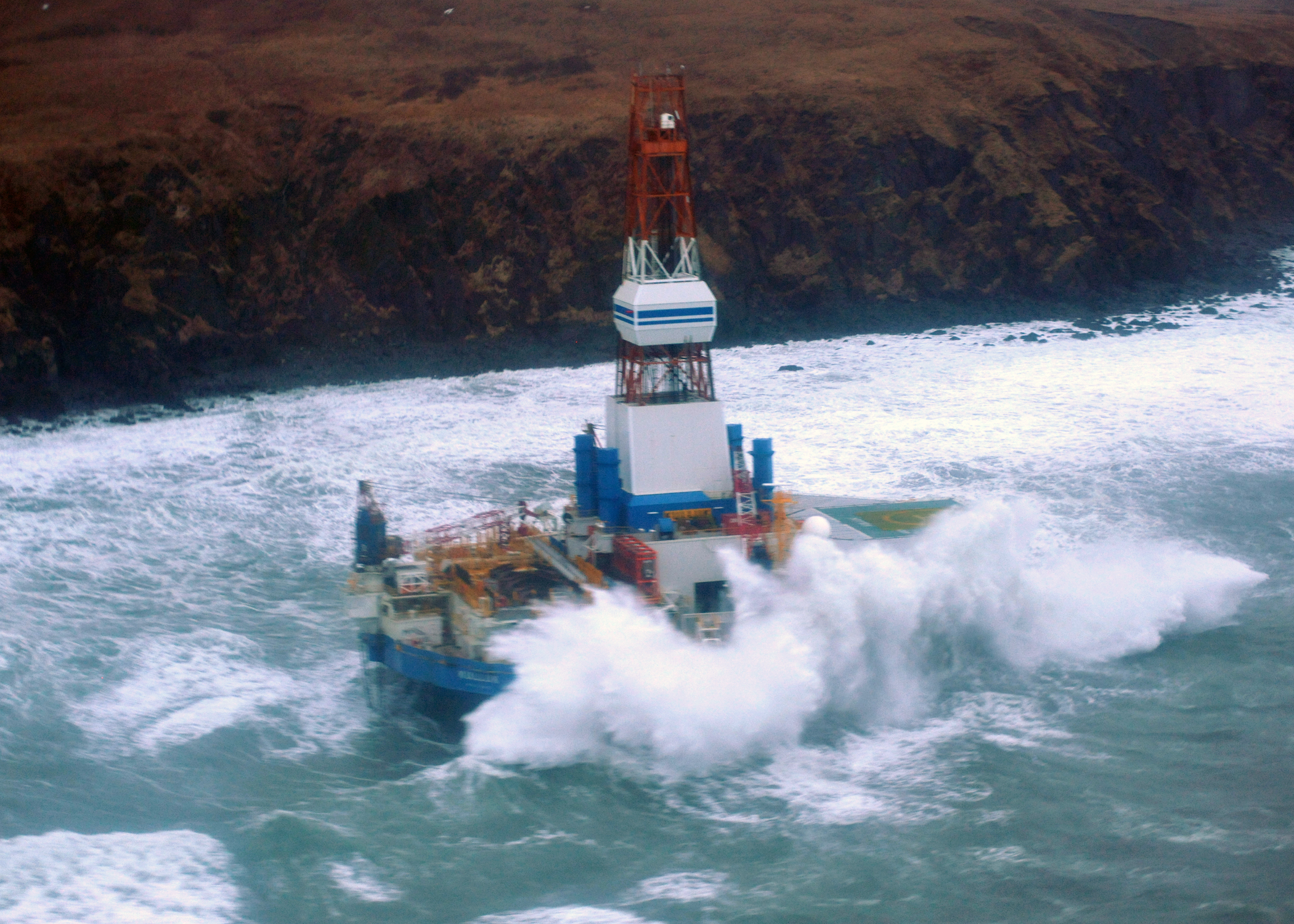 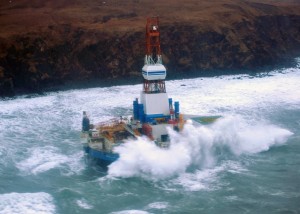 Just a short time ago the world was mesmerized by a mile-deep live feed of an unstoppable tempest of brown crude and an unprecedented frenzy of human activity undertaking desperate, inadequate attempts to halt the flow and skim, burn, disperse, and boom the rest. In the countless hearings by Congress and the National Commission on the Deepwater Horizon Oil Spill and Offshore Drilling that would follow, talk of a cold, distant frontier was unavoidable:  The chilling thought of such a disaster occurring in the Arctic, where remoteness, vastness, heavy weather and unforgiving seas combine to make even simple tasks at sea profoundly more difficult. In the face of the largest oil spill in history, many of us found consolation in that we were finally paying attention to the perils of offshore drilling and these lessons would finally be learned.

What BP Deepwater Horizon illustrated vividly was that civilization’s striking advances in deepwater drilling have far outpaced its ability to clean up should a disaster occur. Perhaps the most chilling of all the Congressional testimony was the revelation by oil company CEOs that the essence of their plan for dealing with a catastrophic oil spill was to not have a catastrophic oil spill. A great idea on paper, but in the real world, an arrogant denial of the limits of technology, human error, and Mother Nature’s merciless power.

Now, as if on queue, Shell’s Kulluck platform has run aground on the the east side of Sitkalidak Island, roughly 40 miles southwest of Kodiak City. Fortunately, all 18 crew members have been rescued. However, matters could have been much worse had the platform broken away from its tug above the Arctic Circle where it would normally be operating, a location far from any Coast Guard base. As it turns out, Kulluck ran in to trouble close to the Coast Guard’s well-equipped Alaska headquarters at Kodiak .

If BP Deepwater Horizon oil spill was a wakeup call, then the grounding of Shell’s Kulluck platform grounding is the bucket of ice water poured over our heads — salty ice water. The implications are clear. The oil industry hasn’t proven itself ready to drill in Arctic waters. And there’s too much at stake, including human lives and a vibrant marine ecosystem.

Here in Washington, DC, it seems like every night for more than two years, BP ads flash on the television with happy faces and stunning images of an oil-free Gulf of Mexico and tasty Gulf seafood. The nice man from BP reassures us that the Gulf is open for business. On the one hand, I hope these ads succeed in encouraging Gulf tourism, something that can really make a difference for Gulf business owners who have suffered terribly. On the other hand, BP’s efforts are not likely to be purely altruistic. Their carefully-worded propaganda is giving the public the impression that the disaster is ancient history and it’s all better now, an echo of the Administration’s August 2010 oil budget report and then-White House advisor Carol Browner’s Today Show appearance where she comforted us with the words,  “three quarters of the oil is gone.”

But it’s not gone. It wasn’t gone then and it’s not gone now. And I’m afraid that outgoing EPA Administrator Lisa Jackson’s legacy will be dominated by her sanction and oversight of what may well prove to stand among the worst environmental decisions in history: The unbridled use of chemical dispersants one mile beneath the Gulf, ensuring that countless gallons of oil would never reach the surface where it could be skimmed, and forcing the Gulf to eat a toxic soup of oil and dispersant.

Numerous studies show that oil remains in the Gulf, and is working its way into the food chain. We’ve seen images of vast beds of delicate deepwater corals smothered by dispersed oil and shrimpers I’ve spoken with are still finding oil when they trawl. Many of my scientist colleagues agree that we won’t fully know the impact of what we did to the Gulf for a decade or more. 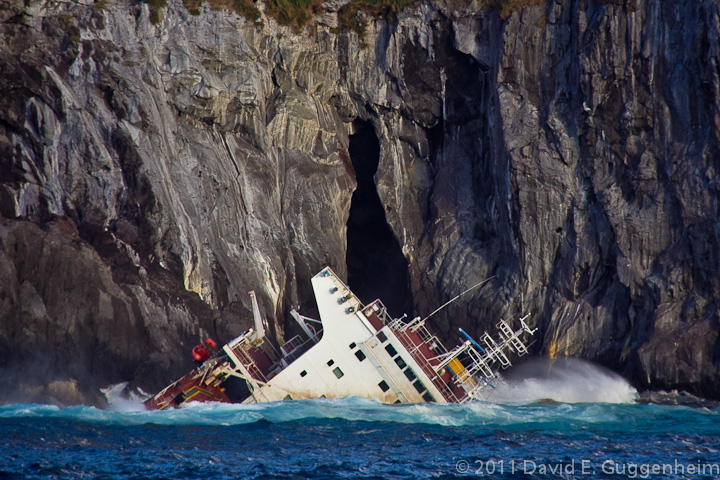 Finally, I’ve read articles and posts dismissing the environmental threat posed by the Kulluck Platform which contains approximately 150,000 gallons of fuel aboard. Whether or not this particular accident has serious environmental consequences remains an open question. But I have witnessed firsthand that it doesn’t take a blowout or supertanker to create an oil spill disaster. In March 2011 I watched in horror as a bulk carrier with a load of soybeans, the M/S Oliva, sat helpless, pounded by waves, aground at Nightingale Island, part of the Tristan de Cunha archipelago in the South Atlantic. The archipelago holds the second largest concentration of seabirds in the world and is home to half of the world’s population of the Northern Rockhopper penguin, an endangered species that has declined nearly 90 percent since the 1950s. The crew was rescued just before the ship split in half, spilling its fuel at one of the worst possible locations on the planet. Earlier this week I learned from a colleague on Tristan de Cunha that the Rockhopper penguin population has been devastated and now stands at less than half its former size.  (For the full story, please see A Statistically Impossible Plea for Help.)

Most know Exxon Valdez as Alaska’s biggest marine oil spill, but how many know the name of the ship that caused Alaska’s second-largest spill? Eight years ago, the Selendang Ayu, a bulk carrier with a load of soybeans, Oliva, broke in half in the Aleutian Islands, its fuel killing thousands of seabirds. (See Arctic Shipping is a Disaster Waiting to Happen).

The American Land Conservancy explains that  Sitkalidak Island’s  “location and highly irregular coastline traps abundant food sources upwelling from the central Gulf of Alaska attracting large numbers of seabirds and marine mammals. Concentrations of herring around the island are among the highest in the [Kodiak] archipelago, and the largest flock of common murres ever recorded by the U.S. Fish & Wildlife Service was in Sitkalidak Strait. It is also home to sixteen wild salmon rivers.“

As I wrote in A Statistically Impossible Plea for Help, it’s becoming apparent that these statistically impossible events aren’t as impossible as we once thought. Many of us have long expressed grave concern about drilling in the Arctic and this accident demonstrates why. Despite our advanced technologies, we are still unprepared to deal with what Mother Nature can dish out. Our clean-up technologies are more than a generation out-of-date and BP Deepwater Horizon unambiguously demonstrated their utter lack of effectiveness. Human ingenuity advanced without humility dooms us to repeat the great disasters of the past, but with consequences that are potentially far more grave. We have an unique moment in history to develop clean energy alternatives, find new efficiencies in the energy we use, and consider the fate of our descendants in the process. We need to remember what we’ve forgotten so quickly…the haunting image of brown crude endlessly rising from the depths.

A Small Gift as a Token of Our Appreciation