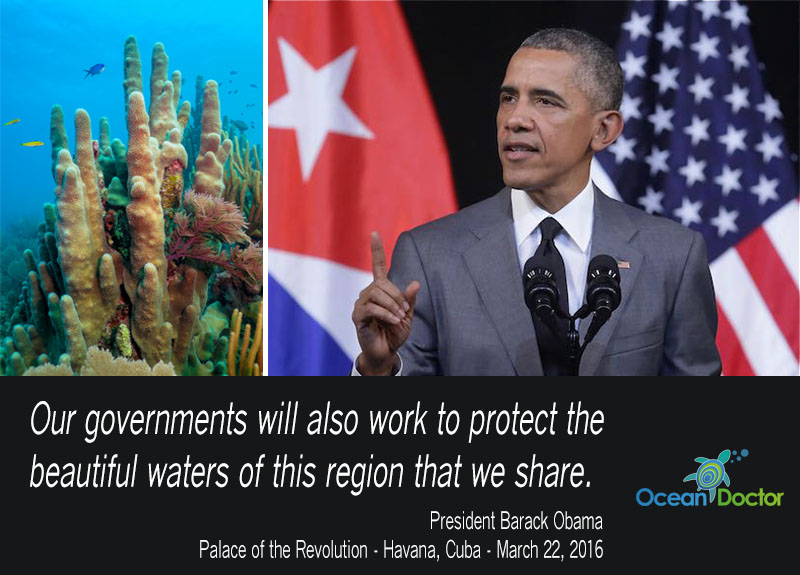 “More broadly, we’re moving ahead with partnerships in health, science, and the environment… Our governments will also work to protect the beautiful waters of this region that we share.

And as two countries threatened by climate change, I believe we can work together to protect communities and our low-lying coasts.  And we’re inviting Cuba to join us and our Caribbean and Central American partners at this spring’s regional energy summit in Washington.”

In his remarks to the Cuban people on March 22nd, 2016, President Barack Obama — the first U.S. president to visit Cuba in nearly 80 years — cited the environment, including marine conservation and climate change, as key areas for collaboration during his speech at Havana’s Palace of the Revolution (right).

As a new chapter opens between the U.S. and Cuba, we fervently support strong government-to-government collaboration on the environment. Ironically, the very political changes that have enabled such collaboration between our governments are also creating a “tsunami norteamericano,” as our Cuban colleagues call it, as thousands of eager visitors from the U.S. flood into Cuba, triggering an unprecedented level of tourist development in the country. Strong collaboration by both governmental and non-governmental organizations, will be essential to ensure that Cuba can avoid the mistakes made by many other Caribbean islands and chart a sustainable path with its new friend to the north.

An Expedition Dedicated to Alonso, Whom We Lost Tragically Yesterday Scroll to top