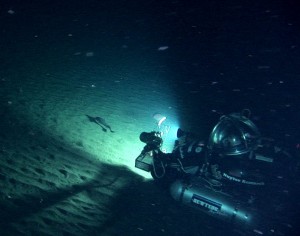 Deepworker submersible filming a grenadier at the bottom of Bering Sea, Alaska

It would take 40 minutes to descend through complete darkness, piloting a one-person submersible into Pribilof Canyon, the second largest underwater canyon in the world nearly one mile deep. By luck of the draw I was the first human to descend into Pribilof Canyon and the larger Zhemchug Canyon — both in Alaska’s Bering Sea — as part of a Greenpeace expedition to document deep-sea corals living in what, until recently, would have been considered one of the most unlikely places for corals to exist.

Among the many harried tasks of radio communications, life support checks and preparing video and other equipment for the upcoming bottom survey, I had a rare moment to reflect on where I was, attempting to comprehend an enormous, complex deep-sea tapestry in the darkness armed with only with the lights of a tiny sub.

At 800 feet squid enveloped the vehicle, some latching on and appearing to try to take a bite. Others gave a menacing dance in front of the lights, issued a blast of ink, and rocketed back into the darkness.

Reaching 1,052 feet, I surveyed one of the ridges above the canyon’s bottom, finding it covered with delicate white sea whips (Halipteris willemoesi), what’s known as an octocoral, some up to 3 or 4 feet long, stretching like bamboo toward the surface.

I flew past other members of a rich ecosystem that carpeted the bottom, snow crabs, sole, halibut, skates and other flat fish. Shallow depressions in the shape of these flat fish cratered the soft bottom, left behind when these fish moved on from a spot where they had buried themselves in the mud, just their two eyes peeking out from above. But as I passed over their abandoned depressions, the lights from the sub reflected off of hundreds of tiny eye balls looking back at me. Each depression teemed with little shrimp and other critters — colorful micro ecosystems moving in where a flat fish had once been lying. As I continued ahead, I was rewarded with more tantalizing views of the great underwater tapestry, but it had no fear that I would return to the sunlit world above with anything more than an infinitesimal glimpse of its mysteries.

The radio crackled with the all-too-soon message from the ship above: “Deepworker 6, prepare the cabin for recovery.” Indeed, despite a dive of more than five hours, my tiny sub had illuminated but a few new corners of this expanse.

When we stand at ocean’s edge, pondering its endless waves, we feel tiny before the swirling waters that reach us from distant shores. So is the feeling thousands of feet below those waves, enveloped in realms barely explored. To our eyes the oceans seem impossibly vast, and for centuries the idea of tiny humans being able to significantly harm them understandably seemed absurd.

Such an antiquated view endured until recent times. My generation grew up with such a notion and for many that perspective still persists. And herein lies the ocean paradox. It’s hard for us to comprehend that something that seems virtually limitless and immune to harm does indeed have limits and is more vulnerable to our hand than we could have imagined.

Thankfully, attitudes have changed — dramatically so — over the past  decades. The next generation is growing up with a new perspective, an understanding that the health of our oceans is indeed in jeopardy. Many students and those early in their careers are dedicating themselves to this important cause, something we should embrace and celebrate today, World Oceans Day. It is now their turn at the helm of the submersibles, boats, ships and space stations, to illuminate more of the ocean’s mysterious tapestry, to cherish its beauty, and remind us of its vulnerability.

Portions of this World Oceans Day reprise our 2007 post, “Alone in the Dark with a Pen Light.”

How to Restore the Planet for Free

Saving a Remarkable Fish Few Have Ever Seen: A Message From Our Interns
Scroll to top