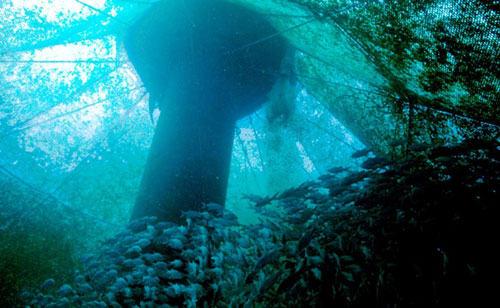 Stop Offshore Factory Fish Farming in the Gulf of Mexico

The Gulf of Mexico has been battered by hurricanes, covered in oil and then sprayed above and below with chemicals in an effort to mask the terrible effects of the spill. Now, the Gulf faces another serious threat that can harm the rest of our ocean waters, marine wildlife and people too.

Years ago, the people that make management decisions about the Gulf of Mexico approved a plan that would allow development of giant floating fish farms in Gulf waters, despite that tens of thousands of people clearly voiced opposition to it. Soon after that decision, the federal government announced they would create a national policy to guide the building of ocean fish farms in U.S. waters. That policy was finalized last year over many objections. Now, the plan for allowing fish farms in the Gulf is up for renewal so it matches the new federal policy – this means we have one last chance to stop this! Let the federal government know we have had enough damage in the Gulf!

And this is not only about the Gulf of Mexico – it is a back door way to promote ocean fish farming in all our oceans waters. For years, proponents and the federal government have been pushing to pass national laws that would allow development of ocean fish farms all around the country – but Congress listened to the thousands and thousands of people like you who spoke out against this – and last time they did not even get one supporter for the bill that was introduced in Washington, DC. So now, allowing ocean fish farms through the fisheries management process is how proponents hope to make this happen – and the Gulf of Mexico is first in line for where these giant dirty fish farms may be!

Please use the form below to tell the Council we don’t want factory farmed fish in the Gulf of Mexico. At a minimum it needs to revise the Plan to be in line with the basic standards established in the National Aquaculture Policy and include the latest scientific findings. This means a meaningful open discussion with public input.

Finally, it is important to note that viable alternatives exist. Ocean Doctor has been promoting sustainable, next-generation aquaculture practices since its inception, including land-based, recirculating aquaculture systems (RAS), a clean technology that uses no antibiotics or chemicals, can recirculate up to 99% of its water, and has no effluent. Such farms can be placed virtually anywhere, including city centers close to where fish are consumed. Sadly, the federal government has focused on advancing offshore aquaculture at the expense of this more sustainable alternative.

The War, The Exodus, The Hurricane, The Oil Spill: One Gulf Community’s Determination to Endure (Part 2)
1 reply