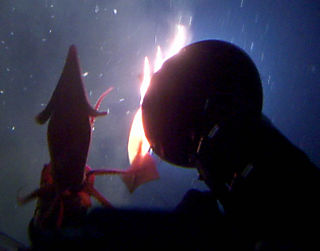 It’s the fantasy of many a marine biologist and explorer. To catch a glimpse of the giant squid, alive,and in its natural habitat: The deep ocean. Giant squid have been scientifically documented at a size of up to an incredible 43 feet long based on specimens that have washed ashore. I’ve seen one such specimen at the Los Angeles County Museum of Natural History. Laying there pickled and motionless in its sterile white display case, it was hard to imagine this animal rocketing about the dark depths, living up to its reputation as a formidable predator. During one of his talks when I first met oceanographer Bob Ballard, he compared trying to find the giant squid from a submersible to trying to find an F-15 jet racing by, on a mountain top, at night, in a driving rainstorm, with a flashlight. Yesterday I had second thoughts about looking for the giant squid when one of its cousins, less than 2% of its size, disabled my sub and aborted my dive as I was descending through 1,300 feet.

In all the years I’ve been scuba diving, I’ve never been attacked by a sea creature. This, of course, excludes two unnerving but harmless remoras that simultaneously hitched a ride on my legs, or countless tiny dusky damsel fish that bit at my chest to defend their territory they felt I was invading, or stinging hydroids I accidentally brushed against. Never have I (knowingly) been mistaken for food while exploring the depths — until now. On almost all of our sub dives here in the Bering Sea, starting at close to 1,000 feet, we’ve encountered the “squid layer,” concentrations of 6-12″ squid, Loligo opalescens, which go by the official common name of “Opalescent inshore squid” but are more commonly known on the west coast as “California market squid.” My encounters with these mollusks have given me new respect for what I have come to recognize as sleek and skilled predatory missiles whose prey don’t stand a chance. 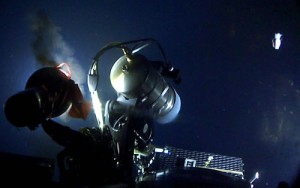 Squid are truly jet-propelled. They swim faster than any other invertebrate by rapidly shooting water out of their mantle cavity into a jet stream nozzle they can steer, like a jet boat. Some squid have been clocked up to nearly 15 miles per hour. Underwater, that’s practically light speed. Our subs clock in at about 3 miles per hour. Their blinding speed, coupled with their armament of two powerful tentacles (in addition to their 8 legs), barbed suckers and razor sharp beak, give them quite an edge over their prey, which include small fish, crustaceans, and mollusks, among others. Many of the squid’s prey, like lanternfish, are bioluminescent, creating their own flashes of light. Squid are highly tuned to these bright flashes and are powerfully drawn to any source of light?like the lights of a descending submarine. 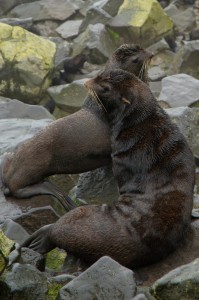 A massive triangle of light in the middle of the Sea of Japan is so brilliant it’s visible from space. The source of light was a mystery until someone realized that the fleets of industrial fishing boats that pursue squid know well about the squid’s lust for light. This triangle marks the position of the Japanese squid fishing fleet. Each vessel may have up to 50 lamps of up to 3,500 watts. The entire fleet may be using 200 megawatts to power these lights. That’s nearly 20 percent of the generating capacity of Unit #3 of Southern California’s San Onofre Nuclear Generating Station, enough electricity for nearly 250,000 homes.

Squid are commercially fished around the world, including in the United States. And squid are also taken from the sea as bycatch, the unintentional catch of one species when fishing for another. This has been a serous problem here in the Bering Sea when fishing boats seeking Alaskan pollock were hauling up far more squid than pollock, necessitating fishing restrictions. The seemingly limitless bounty of squid, as with so many other animals in the sea, has turned out not to be so limitless after all. They are a critical part of the ecosystem, voracious predators themselves, and, in turn, serving as prey for all sorts of fish, porpoises, whales and seals. The fur seals we saw on St. Paul Island are just one of the species that depend on squid. 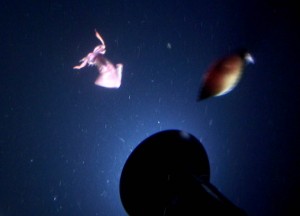 As I descended into Zhemchug Canyon yesterday past 1,300 feet yesterday, I reported to Mike at the navigation station on Esperanza that I had entered the “squid layer.” My external lights were on, as were Michelle’s in the other sub about 100 feet below me, so that we could maintain visual contact during the dive, a safety precaution at these depths. But to a squid, my lights meant a meal, and they pursued me with intent to consume. Ink was everywhere, they clung to the lights with their tentacles and attacked with their beaks. They torpedoed in all directions around me, leaving black clouds of ink hanging in their paths. So much ink accumulated it appeared that my lights were smoking. On the front of the sub was tied a mesh bag of styrofoam cups. Under pressure, the air in the styrofoam cups compresses, and the cups shrink to a fraction of their original size. The crew had creatively decorated the cups with clever slogans and artwork — a great souvenir. I noticed the squid were especially attracted to the white, reflective cups and grabbed onto the mesh bag, trying to reach the goodies inside. 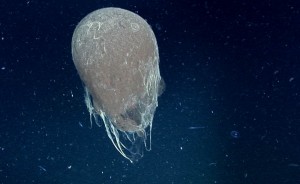 What is it? We believe it’s a squid egg case

I noticed something else — squid parts. Some of the squid ended up as calamari, having taken the unfortunate route to my lights through the sub’s thrusters. Suddenly, the thrusters sounded different, more faint. The sub was no longer descending and it began to spin. One of my vertical thrusters was offline. I tried powering the thruster circuit off and on again, reversing direction like you would on an outboard motor to clear debris, but to no avail. The sub did what it was supposed to do — it sacrificed a two dollar fuse to save a $15,000 thruster. I would not make it to the bottom, just another 400 feet below me. The topside team wisely instructed me to terminate my dive and prepare for recovery.

As I slowly made the ascent back to Esperanza, I realized my image of squid had changed forever. How different was my image of these agile, powerful animals from the my first sight of squid, compressed into a frozen block inside a cardboard box my father had pulled from the general store’s freezer in Cape May Point, New Jersey as we were heading off to cast our rods into the Delaware Bay. That image of the giant squid laying at the Los Angeles County Museum suddenly had life and gave me pause about the wisdom of maintaining the fantasy of pursuing such a formidable creature in the dark depths. But a moment later, I came to my senses. I’ll still take my chances for a fleeting glimpse of that magnificent animal. Later that day, I smiled when I read what one of the crew had written on one of the styrofoam cups: “No pressure, no diamond.”