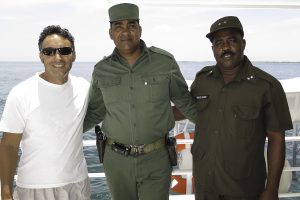 Our captain, Arjel, and the two soliders that delivered the letter from El Comandante to our vessel (Photo: David E. Guggenheim)

Our captain watched with some consternation as an unidentified vessel, gray with no markings, headed straight toward our vessel, anchored more than 50 miles off Cuba’s southern coast. Others in the crew speculated nervously about the approaching boat, never previously seen in these parts. The boat pulled alongside and two imposing figures boarded, both in olive military uniforms. A mustachioed representative of the Ministry of Interior stood by his taller colleague whose uniform, like the boat that carried him, bore no markings at all. A sidearm hung imposingly from his belt. He turned to the captain and requested to meet with Bobby Kennedy, Jr.

At that moment, Bobby — a leading environmental activist, board president of Waterkeeper Alliance, and son of the late senator Robert F. “Bobby” Kennedy — was 90 feet below the surface with the rest of our group, observing a dozen or so Caribbean reef sharks tracing mesmerizing circles about us. We were carrying the flag of the Explorers Club, visiting and documenting previously unexplored coral reef ecosystems in Cuba’s southern waters.

After returning to the boat, the mission of our mysterious guests was revealed. We had been visited by a representative of former Cuban president Fidel Castro’s personal guard who had a letter from the Comandante for Bobby. Mission complete, they posed for a quick photo and departed on the 50-mile journey back to shore and the 6-hour drive back to Havana. They had traveled an incredible distance to find us and hand-deliver a letter. We were obviously quite curious as to its contents

Finding Hope for the Invisible Island
Scroll to top