Visit this page for current information on the BP Deepwater Horizon oil spill’s potential impacts on Cuba. More detailed information, including technical reports and satellite imagery can be found here.

Summary: On July 1st, the National Oceanic and Atmospheric Administration (NOAA) released the results of long-term modeling studies predicting the probability of shoreline threat from the BP Deepwater Horizon oil spill (see figure below). The results focus on shoreline impacts and do not consider the continued use of dispersants at depth. The results are generally consistent with the results of its Gulf oil spill modeling efforts of the National Center for Atmospheric Research (NCAR) which released its results on June 3rd. The NOAA model shows moderate risk to Cuban shores, the highest risk being along Cuba’s northwestern coast (Pinar del Río province).  In contrast, the NCAR model shows a very high risk to Cuban shores, the highest along northwestern Cuba, but with a worst-case scenario of oil impact along the entire northern Cuban coastline.

Note: Our updates have been less frequent because NOAA has suspended its offshore oil forecasts. A persistent eddy feature (Eddy Franklin) has dominated the central Gulf and has prevented oil from entering the Loop Current. Presumably, NOAA will resume its offshore forecasts should this situation change. In addition, Roffer’s Ocean Fishing Forecasting Service has discontinued its daily updates and is providing periodic updates only at this time. Please see their site for additional information. 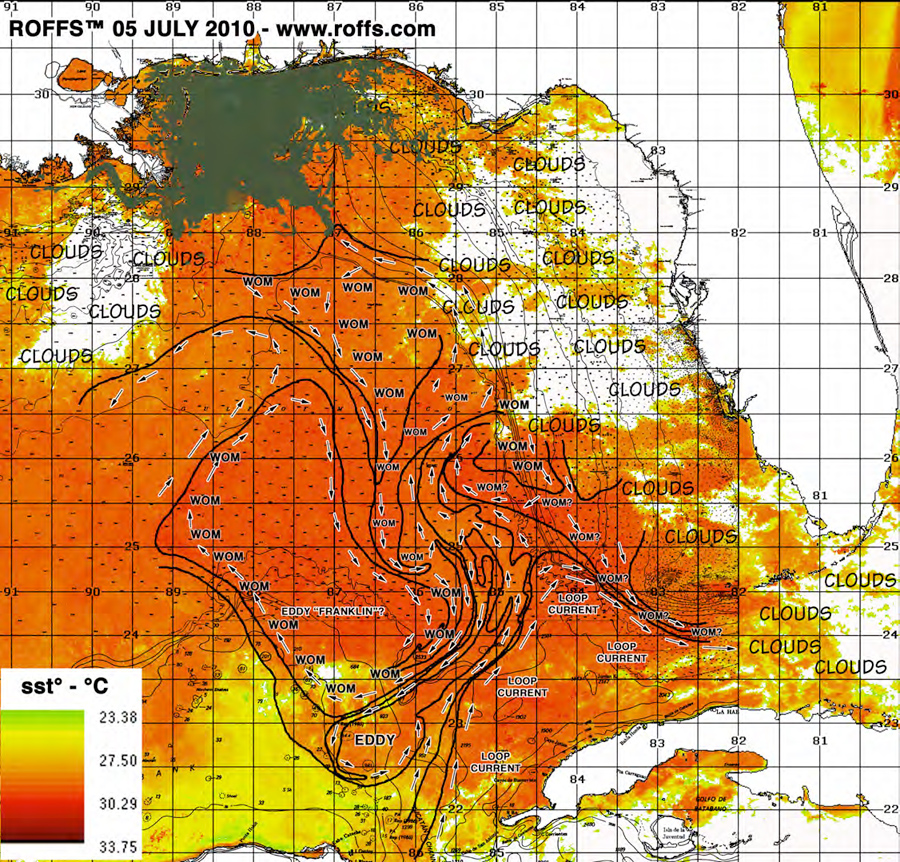 For the past decade we have been working with our colleagues at the University of Havana’s Center for Marine Research (Centro de Investigaciones Marinas, CIM) to conduct research and conservation projects in Cuba’s coastal areas. Since 2002, our work has focused in Cuba’s Gulf of Mexico waters where CIM has been conducting the first-ever comprehensive studies of this little-known area. What we are learning is that this region is incredibly rich with healthy corals, fish and serves as critical habitat for imperiled species such as sea turtles, manatees and sharks.

The catastrophic oil spill in the Gulf of Mexico from the BP Deepwater Horizon presents a potentially grave and unprecedented threat to Cuba’s marine life and coastal areas. Not only would this be devastating to Cuba’s marine life, but given the biological connections present in the Gulf of Mexico, such an impact could affect a myriad of species, including fish, sea turtles, dolphins, manatees, sharks, corals inhabiting the waters of the U.S., Mexico and beyond.

The primary risk to Cuba comes from the trajectory of the “Loop Current,” a prominent but very variable feature of the Gulf of Mexico. Should the oil become swept up by the swift Loop Current, it could end up in Cuban waters within a matter of days, impacting coastal areas still recovering from the impacts of 2008 hurricanes, Gustav and Ike.

In 2007, a trinational collaboration was formed among the three countries bordering the Gulf of Mexico (Cuba, Mexico and the United States) to elevate collaboration in marine research and conservation to a new level. Sharing of information is central in this collaboration and since the scope of this disaster became evident, our collaboration has mobilized in order to provide our Cuban colleagues with the best information possible in order to plan for potential impacts and deal with them should they occur. A related page on this site has been set up for the purpose of sharing detailed information, including technical reports and satellite imagery and interpretation.

A Blueprint of Collaboration — and Friendship — With Cuba

Expedition to Cuba’s Gulf of Mexico