Until that tranquil morning in late June 1974, the sum total of my SCUBA diving experience had been in a landlocked state, in a stifling, moldy indoor YMCA pool in the Philadelphia suburbs and a Pennsylvania quarry, flooded with icy soup-green water. Barely comprehending the new world of pungent humidity, mountainous afternoon cumulus clouds, and lush tangles of flowering succulents I experienced at water’s edge during my first visit to the Florida Keys, I was wholly unprepared later that morning when I found myself seated in sugar-white sand with 40 feet of warm, clear aquamarine water above my head. As impossibly multi-colored fish passed slowly within reach before my wide 15-year-old eyes, my gaze broadened as I marveled at the towering jetties of coral around us, living layer cakes of corals upon corals, brown and mustard rock-like structures, encrusted with brilliant red, violet and orange coralline fans and branches, swaying in the warm, nourishing current and, like eager spring blossoms, reaching toward the dancing sunlight scattered on the surface above.

Even in those first minutes face-to-face with a coral reef, the enormity of what I was witnessing was clear to me. I remember thinking, “There’s a whole living world going on down here, and we don’t know anything about it.”While I may have suspected in those moments that I would dedicate my career to something having to do with the oceans, I never would have dreamed that more than three decades later I would be literally immersed in some of the most important work of my life just 90 miles to the south of where I was seated beneath the waves.

Last week, as I departed Ft. Lauderdale and the 11th International Coral Reef Symposium, the world’s largest coral summit held every four years, the news was sobering. One-third of the world’s corals are well on their way to outright extinction, and the rest are threatened with, among other things,the indignant end of simply dissolving away, as increasing carbon dioxide in the atmosphere from fossil fuel emissions enters the oceans, raising their acidity to the point where any ocean creature with a calcium carbonate shell — from corals to clams — succumbs to the acid waters.When my daughter was 15 and floated above that same reef I had experienced, it had become a pale shadow of the miracle of nature I had so delighted in. Nearly half the corals in the Florida Keys have died in my lifetime. Some are bleached bone white, others shackled in diseased bands of black. Many more lie smothered in broad blankets of algal slime which have robbed the reef of its rainbow of colors, leaving a lifeless green-gray skeleton where countless diversity once eeked from every imaginable crack and crevice. As I beheld this tragic image, little did I imagine that important clues to saving this reef and many more like it around the Caribbean and the world, might lie just 90 miles to the south.

I now sort through assorted dive gear, video equipment, and sunscreen preparingfor my 37th visit to that magical place 90 miles to the south, to an island larger than all the other Caribbean islands combined, to an island whose coat of arms bears a key — “llave del golfo“, the key to the Gulf of Mexico — a subtropical nexus where the waters of the Caribbean Sea, Gulf of Mexico and the Atlantic Ocean intertwine in a sublime undersea cocktail of diversity, color and mystery. Our fourth joint expedition of Proyecto Costa Noroccidental (Project of the Northwest Coast) — a project of the University of Havana’s Center for Marine Research (Centro de Investigaciones Marinas: CIM) and the Harte Research Institute for Gulf of Mexico Studies at Texas A&M University-Corpus Christi — will continue our ongoing project to explore the most unknown corner of the Gulf of Mexico: Cuba’s northwest coastal waters.

It is often said that those 90 miles of open water south of the Florida Keys — the Straits of Florida — separate Cuba and the USA. Like a hand-drawn blue borderline, the Straits are often invoked as a symbol of the 50-year-old Cold War that has frozen our two countries so tantalizingly close, yet so tragically far apart. But to the sea turtles, sharks, lobster, whales and other sea life, those same 90 miles of blue unite our countries with racing blue currents, unseen underwater pathways, and a web of colorful life that defies the perceptions of so many of the Gulf of Mexico, who know it only as a hot, muddy cauldron that spawns hurricanes and oil platforms. Cuba, Mexico and the U.S. share the Gulf of Mexico and have a responsibility to work together to understand and protect it. Thankfully, despite debilitating restrictions, which are ever-changing in the cool winds of Cold War politics, we have worked for a solid eight years now with our Cuban colleagues, advancing our understanding of the Gulf of Mexico and providing research opportunities for Cuba’s next generation of marine scientists — nearly 20 have based their Masters and Ph.D. research on our joint projects.

Cuba’s northwest coast– the verdant Pinar del Rio province, home to Cuba’s legendary cigars — is the least-developed coastal region of Cuba. But as Cuba’s tourism trade continues to develop and as Cuba’s fledgling offshore oil development expands into the Gulf, we hope that the insights from our joint research help to guide the hand of such development so that some of Cuba’s most precious assets, its coral reefs, will be spared the all too common fate I’ve seen elsewhere in the Caribbean. And there is much at stake.As we dove during the second expedition, it was as if we had been transported decades backward in time, to the healthy, vibrant, towering reefs I remember from my mid-teens. The reefs I have seen in the Archepelago de Los Colorados, the barrier reef that runs along Cuba’s northwest coast, are the healthiest I have seen in my life. For that reason, and because of its unique history and geography, Cuba may hold important clues for coral reefs elsewhere in the Caribbean and perhaps around the world.

Good friend and colleague, Dr. Gaspar Gonzalez-Sanson, titular professor at University of Havana, CIM, and co-principal investigator of Proyecto Costa Noroccidental, recently pointed to a number of possible reasons for the health of Cuba’s reefs when we spoke when I was recently in Havana:

Sunset on Cuba’s Gulf of Mexico

In countless ways, the island of Cuba is unique. And when it comes to coral reefs, Cuba is again, unique. Here an island of thriving corals flourishes amid a world of corals dying and disappearing. In this mysterious corner of the Gulf of Mexico where time seems to have stopped, I find hope. Hope that the rich ecosystems of this beautiful island will endure. And I find hope that Cuba’s coral reefs might share some of their tantalizing secrets, secrets that can offer clues to protecting and restoring coral reefs elsewhere, including a special place I still remember in the Florida Keys, just 90 miles to the north. 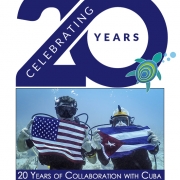 The Single Word I Taught First Graders in Cuba
6 replies

Oceans Day Message from the Next GenerationExpedition to Cuba’s Gulf of Mexico: Preparations Underway
Scroll to top