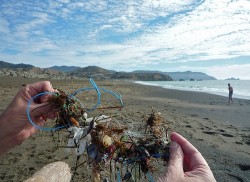 Single-use plastic bag bans aren’t the end of the world, as the plastic lobby would have us believe.

They do, however, prevent wastes from floating to the end of the world.

Plastic bags are made to last forever, yet they are marketed for single use. Ironic? Perhaps. Problematic? Definitely. Especially for those places where even that single use has never been put into affect the oceans and remote shorelines of the world. Here, plastic is not made, bought or sold. It simply arrives. And never leaves.

Throughout October and culminating on November 6th, some of the world’s experts and motivated activists on plastic pollution and marine conservation will be presenting their stories in a worldwide TEDx event: The Great Pacific Garbage Patch. But, their focus stretches beyond the Pacific to encompass the global nature of this modern crisis. Already, the videos posted present some disturbing perspectives on just how prevalent and persistent this problem has become.

Researchers and artists on Midway Atoll, for example, demonstrate how every wave that laps the shore leaves a necklace of gaudy fragments encircling the island in concentric strands that mark the tides. This effort is part of a larger initiative to document the devastating consequence of our disposable culture on albatross. It’s a spookily realistic example of the butterfly effect: how single, daily decisions to use and dispose of plastic can be linked to the mass-starvation of one of the mightiest and legendary creatures on the planet.

The chances that we can actually trace a lighter inside the rib cage of a dead baby albatross on Midway Atoll to the smoker who tossed it somewhere in Japan or California are as scant as our ability to trace a tornado in Texas back to the flapping of a butterfly’s wings in Brazil.? But, there is no denying the connection is there. And it extends beyond birds to affect the entire food web of the ocean, the beauty of beaches, the health and safety of our food supply.

So, the question remains, what can we do to turn the tide?

To clean up the mess is nearly impossible, especially since the size of most plastic particles are no bigger than grains of sand: any net that scoops them up will also remove lots of microorganisms that are critical to life in the sea. What we can do is stop making the problem worse: Americans alone toss 100 billion bags each year, equivalent to 12 million barrels of oil.

This August, the city of Edmonds in Oregon Washington took a giant leap forward by banning the use of plastic bags in all stores. There has been no major fall out, with customers and businesses adjusting to the ordinance calmly, effectively and quickly. It seems they weren’t tricked by the the American Chemistry Council, who poured millions into campaigns to block such bans. The ACC’s scare tactics worked to turn Californians into cowards this fall and to prevent Seattle’s first initiative to tax plastic bag use.

The example of Edmonds shows there is nothing scary about banning plastic bags. Sign this petition to let the members of Seattle’s Council know it is time they stopped being such scaredey-cats. You can also learn more about how to initiate legislation in your own community by checking out the Plastic Pollution Coalition web site.

What Everyone Should Know About Bottled Water
0 replies