I hadn’t seen it snowing sideways with such intensity since I rode out the "Storm of the Century" in Cape May, New Jersey. Of course, I was looking out the window of a Boeing 737 in motion, very definitely a moving frame of reference, so perhaps the "sideways" part was somewhat exaggerated, but the intensity part wasn’t. On our final approach, I was mesmerized by the sight of a buried St. Louis, Missouri slowly coming into view through a milky night sky, blanketed by the blizzard that was on top of it. The Interstate was a broad white ribbon snaking through the tranquil-looking city, with just a handful of headlights and tailights of vehicles making what must have been an incredibly perilous journey. I would soon be among them.

I was on my way to the Principia School, thanks, in part, to the invitation of Dr. Karen Eckert, one of my personal heroes and that of countless sea turtles of all species around the world, especially the Caribbean. Karen is executive director of the Wider Caribbean Sea Turtle Conservation Network (WIDECAST), formerly a professor at Duke University’s Marine Laboratory in Beaufort, North Carolina and now living in Missouri, bringing salt water love to the heartland.

My taxi driver was a delightful, intelligent, and best of all, cautious gentleman from Kenya. As we ventured on to the very Interstate I saw from the sky, I quickly realized it was much worse than I had realized. It was difficult to tell whether the road had been plowed at all. Driving was treacherous as we passed stranded cars strewn in all directions on both sides of the road as snow continued to dump from above. He drove slowly and carefully, which I greatly appreciated, and we engaged in conversation to take our minds off the stressful journey. When he learned I was from DC, our conversation drifted predictably to politics, and I shared with him my joy at attending the recent inauguration festivies on the Mall. I asked him whether there were celebrations in Kenya, home to Barack Obama’s father. He laughed loudly, "We’re the top in the world [for festivities]! I believe they’re still slaughtering bulls there!"

A few moments later, my mobile phone rang. No school tomorrow — a "snow day." I promised to return to St. Louis another day. But for now, I was there for the night and approaching my hotel. I paid my brave driver by District of Columbia standards: During snow emergencies, the fare is doubled. I didn’t quite have that much cash in my pocket, but came as close as I could and begged him to be careful on his return voyage.

Checking in to the hotel, I received one of the most unusual propositions from a desk clerk I can recall. She said that there were extra service trays and invited me to join her and a group of the staff that were going to go sledding on the grounds later that evening "I’m in!," I replied, but alas, the call never came. Perhaps too many guests ordered room service and there were no longer extra trays. More likely, the manager showed up.

I was greeted in my room by a beautiful gift basket from the Principia School, including all sorts of goodies that would nourish me through my snow day and my subsequent flight to Nebraska. Among the crackers, cookies and teas was a blue and gold plastic bracelet, bearing the theme of Principia this year: "Make a Difference." Good words. For me, they connect to a very special friend named Ed Harte, perhaps the most selfless, generous, humble and funny individuals I’ve had the pleasure of knowing. Formerly owner of a Texas newspaper chain, he was so taken by Dr. Sylvia Earle’s book, "Sea Change" that he donated $46 million to Texas A&M University-Corpus Christi to found a new institute dedicated to the study and conservation of the Gulf of Mexico. His only instructions guiding the use of his phenomenal gift, "Make a difference." That was in late 2000. Today, the Harte Research Institute for Gulf of Mexico Studies is truly making a difference for hundreds of students and researchers around the Gulf of Mexico, including Mexico and Cuba, and I have been proud to serve on its Advisory Council under Sylvia’s always-visionary leadership.

If you happen to run into me (these days, most likely in an airport), take a glance at my right wrist. I’ve worn the "Make a Difference" bracelet from Principia ever since that snowy night in St. Louis. I sometimes glance at it while I’m giving my talks or dragging my butt through airports, and those three words remind me of precisely why I’m making this journey. And to the students at Principia, I look forward to seeing you soon. Please know that this simple gift is paying dividends of inspiration every day.

Video: State of the Oceans Forum: A Call to Action 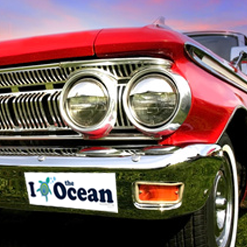 A Small Gift as a Token of Our Appreciation

Here’s my itinerary for tomorrow — 15.5 hours to the top of the... Warm Memories of Cold Alaska
Scroll to top