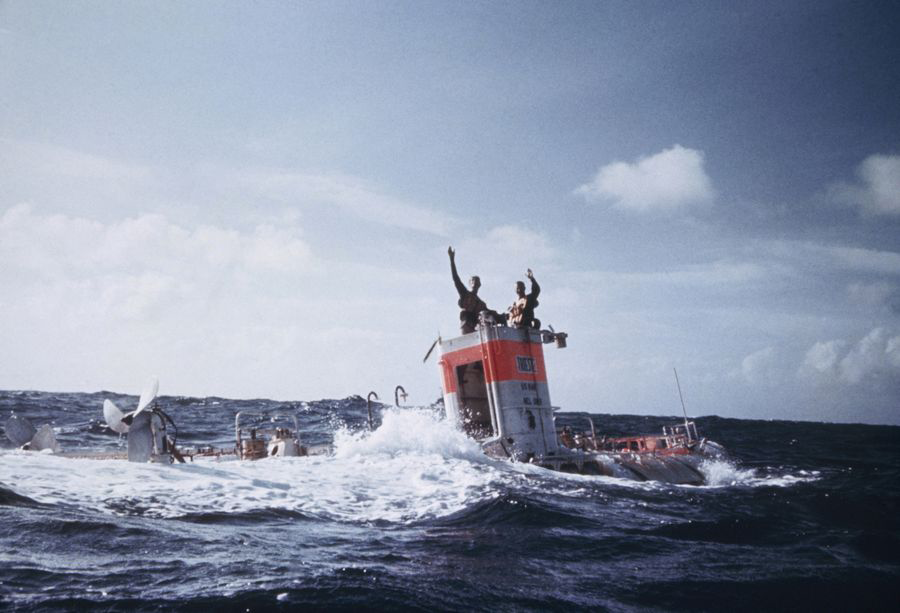 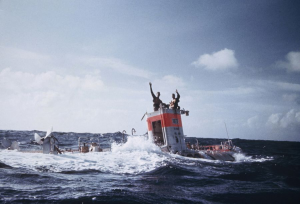 It was Jan. 23, 1960, when Piccard along with ocean explorer Don Walsh climbed aboard the Navy bathyscaphe Trieste and plunged to the floor of the Pacific Ocean’s Mariana Trench, the world’s deepest location, some 200 miles southwest of the island of Guam. Their destination was the trench’s lowest point, Challenger Deep, some 35,800 feet below the ocean surface. The only other individual to dive to this depth since then is filmmaker/explorer James Cameron, who reached Challenger Deep on March 26, 2012. 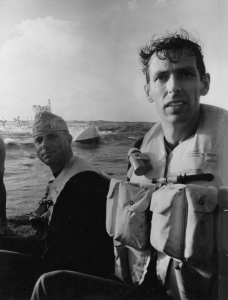 Jacques Piccard and Don Walsh emerge from the bathyscaphe Trieste following their successful descent to the bottom of the Pacific Ocean’s Mariana Trench in January 1960. Walsh and Piccard were the first people to reach the trench’s ? and Earth’s ? lowest point, Challenger Deep, some 35,800 feet below the ocean surface. Piccard, who died in 2008, was posthumously awarded the Hubbard Medal, the National Geographic highest honor, at a ceremony in Washington, D.C., on June 14, 2012 (Photo: Thomas J. Abercrombie; ? National Geographic)

The Hubbard Medal was presented to Piccard’s family by National Geographic Society chairman and CEO John Fahey, assisted by Don Walsh ? who received the Hubbard Medal in 2010 ? and James Cameron.

?Jacques Piccard was one of the first two pioneers to visit Earth’s deepest place,? said Fahey. ?His accomplishment ranks alongside those of other Hubbard Medal recipients, like Charles Lindbergh, Louis and Mary Leakey, Jane Goodall and Robert Ballard. The passion and commitment of intrepid individuals like Piccard continue to inspire new generations of explorers.?

Piccard chronicled the dive for an article in the August 1960 issue of National Geographic magazine. He wrote: ?Like a free balloon on a windless day, indifferent to the almost 200,000 tons of water pressing on the cabin from all sides, balanced to within an ounce or so on its wire guide rope, slowly, surely, in the name of science and humanity, the Trieste took possession of the abyss, the last extreme on our earth that remained to be conquered.?

Piccard and Walsh had to sit on small stools for the nine-hour trip down and back; they spent the hours keeping records of temperatures of water and the gasoline (used for buoyancy), amount of ballast released and water pressure. They kept in contact with the surface for most of the journey via a sonic telephone. When, after four-and-a-half hours, the bathyscaphe finally landed on the ocean bottom, Walsh and Piccard spied a fish, thereby answering a question about the presence of sea life in the deep that thousands of oceanographers had been asking for decades. By proving the existence of life where nobody expected it, the dive pushed governments to ban the dumping of toxic waste into the deepest trenches.

After that historic dive, Piccard went on to build four mid-depth submarines ? called mesoscaphes ? including the first tourist submersible, which took 33,000 passengers into the depths of Lake Geneva in 1964. He then built another mesoscaphe for Grumman and NASA to explore the Gulf Stream during a one-month drift mission in 1969. 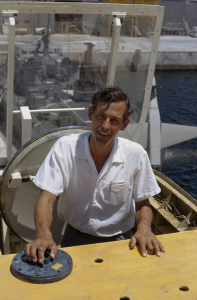 Piccard, born in Brussels in 1922, studied in Switzerland and worked as a university economics teacher. He left teaching to help his father, Auguste (a physicist and the first man to take a balloon into the stratosphere), design the bathyscaphe, a submersible able to take humans to great depths below the ocean’s surface. It was in the bathyscaphe Trieste that Piccard and Walsh reached the bottom of the Mariana Trench.

The Hubbard Medal is the Society’s highest honor. It was named after the National Geographic Society’s first president, Gardiner Greene Hubbard, and has been presented 34 times in the past, the first going to Arctic explorer Robert E. Peary in 1906. Other recipients include polar explorers Roald Amundsen in 1907, Sir Ernest Shackleton in 1910 and Richard Byrd in 1926; aviators Charles Lindbergh in 1927 and Anne Morrow Lindbergh in 1934; anthropologists Louis and Mary Leakey in 1962; Apollo 11 astronauts Neil Armstrong, Edwin Aldrin and Michael Collins in 1970; anthropologist Richard Leakey in 1994; conservationist Jane Goodall in 1995; underwater explorer Robert Ballard in 1996; balloonists Bertrand Piccard (son of Jacques Piccard) and Brian Jones in 1999 and, posthumously in 2000, Matthew Henson, who co-led with Peary the 1909 expedition to the North Pole. Several U.S. presidents, including Theodore Roosevelt and Calvin Coolidge, have presented the medal.

Getting to Know Your Neighbors Below the Surface

Greenland Sharks Are Dog Slow — So How Do They Eat?
Scroll to top