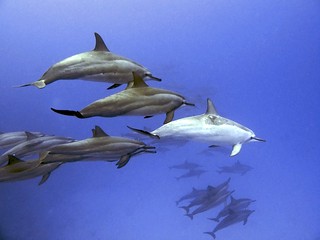 We know dolphins are smart, but a study in the Proceedings of the Royal Society A by Timothy Leighton at the University of Southampton, UK, raises the question as to whether dolphins are actually using complex nonlinear math tricks to hunt. Dolphins sometimes create a “bubble curtain” to corral and concentrate prey like sardines, making it easier to pick them off. But dolphins rely on their sonar when hunting, and all those bubbles would seem to interfere with a dolphin’s ability to distinguish its prey. Bubbles certainly interfere with man-made sonar systems. So the researchers wondered if dolphins, which vary the amplitude of their sonar clicks, use a complex nonlinear processing function to essentially separate the noise from the target. In their experiment, they used such mathematical functions to process the echoes of dolphin-like pulses from targets shrouded in bubble clouds.

Dolphins emit sequences of clicks, and, within such a sequence, the amplitude of the clicks varies. Here such variation in amplitude between clicks is exploited to enhance sonar performance. While standard sonar processing is not able to distinguish the targets from the bubble clutter, this nonlinear processing can. Although this does not conclusively prove that dolphins do use such nonlinear processing, it demonstrates that humans can detect and classify targets in bubbly water using dolphin-like sonar pulses, raising intriguing possibilities for dolphin sonar when they make bubble nets.

…Read the full story at Do dolphins benefit from nonlinear mathematics when processing their sonar returns? (Proceedings of the Royal Society A)

A record 129 dolphins have stranded in Cape Cod over the past 3 weeks. (CNN)
0 replies