November 14, 2011: He was the former trainer of the most famous dolphin of them all, Flipper. There were actually five “Flippers” in all, and when the most well-known of them all, Kathy, died in Ric O’Barry’s arms, he made the profound transition from training dolphins in captivity to combating the captivity industry. His work was featured in the Academy Award-winning film, The Cove

(2009), which used covert techniques to expose the brutal dolphin hunt that persists in Taiji, Japan. Ric shares his powerful message with us. Also: What would you do if your nation was going to disappear off the face of the Earth? We get a dramatic answer from ten warrior dancers of the tiny Pacific coral atoll nation of Tokelau. 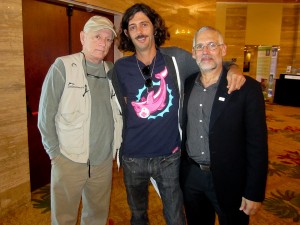 For millions around the world — even in the Soviet Union — a TV show from the sixties captivated us and, if we weren’t already in love with dolphins, we soon would be.

Our very special guest is Ric O’Barry who was the former trainer of Flipper. There were actually five “Flippers” in all, and when the most well-known of them all, Kathy, died in his arms, he made the profound transition from training dolphins in captivity to combating the captivity industry. His work was featured in the Academy Award-winning film, The Cove

(2009), which used covert techniques to expose the brutal dolphin hunt that persists in Taiji, Japan. Ric shares his powerful message with us and you may be surprised that Ric O’Barry is not as angry at the Japanese fishermen responsible for the brutal killing of dolphins as he is with people you may have considered role models.

Ric O?Barry started out capturing and training dolphins for the Miami Seaquarium and through the 1960s became the head trainer for the five dolphins who collectively played Flipper on the beloved American TV show seen around the world.

When Kathy, the dolphin who most often played Flipper, died in O’Barry’s arms, he realized that capturing, displaying and training dolphins to perform tricks was wrong. On Earth Day in 1970 he founded The Dolphin Project, an organization dedicated to educating the public about the plight of dolphins in captivity. He also pioneered work to demonstrate rehabilitation and release as a viable alternative for captive dolphins. He has has since rescued and released over twenty-five captive dolphins in Haiti, Colombia, Guatemala, Nicaragua, Brazil, The Bahamas and the United States.

Delighting in the company of wild dolphins…in the wild — White Sand Ridge, Bahamas. Ric O’Barry advocates enjoying dolphins in their natural habitat, not in captivity. (Photos courtesy of Christine Guinness)

For the last 40+ years he has shared his firsthand knowledge of the harmful effects of captivity on dolphins at numerous lectures and conferences around the world. In 1991 in recognition of his contribution to the protection of dolphins O?Barry received an Environmental Achievement Award, presented by the United States Committee for the United Nations Environmental Program. In 2007 he became a marine mammal specialist for Earth Island Institute and director of the Save Japan Dolphins Campaign

Working with Save Japan Dolphins, O?Barry leads an international effort to stop the killing of dolphins, end the trafficking in live dolphins to theme parks and captive swim-with-the-dolphins attractions and continues to lecture and speak out against the captivity industry.

O?Barry is featured in the Academy Award winning documentary film The Cove, which brought the world’s attention to the hidden connection between the killing, capture, trade and display of dolphins all over the world. O?Barry and his son Lincoln O’Barry are also behind the Blood Dolphin$ TV show for Discovery’s Animal Planet, which continues on where The Cove left off.

If you haven’t seen The Cove, it is a compelling, chilling and remarkable documentary whose impact continues to grow around the world.

Ric doesn’t smile much. He’s no-nonsense and serious. But that belies a tremendous warmth and compassion — especially for the world’s dolphins.

A visiting group of performers from “Water is Rising” — representing the Pacific coral atoll nations of Kiribati, Tokelau, and Tuvalu — gave an impromptu, unscheduled performance in their street clothes, right in front of the Giant Squid exhibit at Smithsonian Institution’s National Museum of Natural History.

Kiribati, Tokelau and Tuvalu are tiny, with populations of 100,000, 1,500 and 12,000 respectively. As highlighted in the Copenhagen UN Climate Change Conference of 2009, these Pacific atolls are at the front lines of global warming. With their highest elevations at only 9 to 15 feet above sea level, they risk becoming the first cultures on earth to be submerged by climate change.

A group of 36 dancers and musicians from the islands are on tour in the U.S. to raise awareness about climate change. Below is a video of the? warrior dance by 10 warrior dancers from Tokelau. As the group spokesperson told the audience, the highest point on Tokelau is a coconut tree. In earlier times, the warrior dance was meant to intimidate others. Its energy is hypnotic and you may agree it conveys the vigor and passion of a culture that wants very much to survive.

Citizens of the Sea, available at Amazon.com:

Aboard the Cape to Cape Expedition: In Shackleton’s Footsteps on South Georgia Island

Whaling: Beginning of the End?

Protection for the Ocean Food Chain