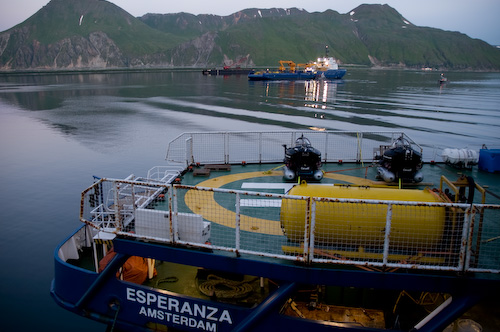 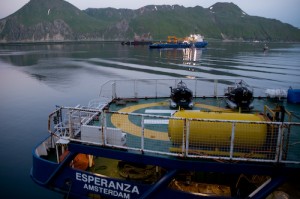 At 5:15 am, the rear suspension of the taxi to Washington, DC’s National Airport groaned alarmingly under the weight of my five heavy pieces of luggage: A duffel of dive gear, a pelican case with an underwater video housing, a duffel of warm clothing, a backpack of video and camera gear, and a roll-aboard full of hard disks, cables and other geeky accessories. Alaska Airlines Flight #1 took me west across the country to Seattle, then north to Anchorage. As we pierced the clouds on our descent, the youngster seated behind me shrieked to his parents, “It looks like a big park!” Alaska was as I had remembered it: Big, wild, and beyond beautiful.

I made my way to the Peninsula Airways departures and rendezvoused with expedition photographer Todd Warshaw, who was traveling from San Diego. We later ran into Michelle Ridgway, an Alaskan marine ecological consultant and fellow sub pilot, along with Bob Stone, a NOAA scientist specializing in the cold water corals we hoped to study on the expedition. But we weren’t supposed to see Michelle and Bob — they were supposed to be in Dutch Harbor already. Their earlier flight had been cancelled, due to the notorious thick fog that occurs this time of year in Dutch Harbor. The earliest flight for which they could be confirmed was August 1 — more than a week away. They discussed the possibility of missing the first week of the expedition and rendezvousing with us in St. George in the Pribilof islands, certainly less than an ideal situation. 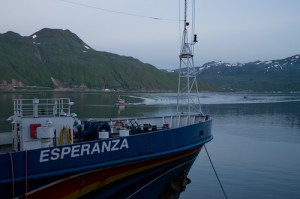 Thankfully, Michelle returned from the podium with a grin — they were on our flight?which was now delayed?and delayed? Finally, we were called and on our way. A three-hour flight along the Aleutian Island chain in a small Saab propeller plane, with a stop for fuel at aptly-named Cold Bay. We arrived at last to Dutch Harbor, met by Timo Marshall, retrieved (thankfully) all our bags, and drove a mile or so to the triple-parked M/V Esperanza. You couldn’t have designed a more bizarre obstacle course for those carrying luggage. First, cross the gangway to the large barge, walk through the TV room where one of the crew was oblivious to our delegation, out the back door of the barge, down an external corridor, up a ladder, and around a huge dry dock structure, more twists, turns, chutes and ladders. Finally, Esperanza’s gang way was in sight, only angled down to the deck from the dry dock structure with a sign indicating “Only One Person at a Time.” Our heavy bags were roped and hauled up to the deck. My first hour in Dutch Harbor and I was overheated, sweaty and out of breath.

A nice reunion with the captain, crew, fellow sub pilots, and the incredible Nuytco crew who oversee all sub operations, and my 16 hours of travel had finally come to an end. Another 16 hours of travel from Dutch Harbor to Pribilof Canyon would begin the next day, but I’d sleep through most of it.

Where Condos Fall from the Sky