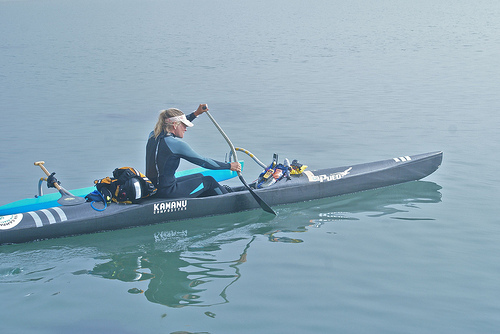 January 3, 2011: She describes herself as an ordinary mother of two, but there’s nothing ordinary about Margo Pellegrino, the spirited New Jerseyite who has paddled the East Coast, Gulf Coast and in 2010, the West Coast of the U.S. to help elevate awareness about the oceans. She’s an inspiration, with lessons for the “Housewives of New Jersey” and “Snookie.”

This Week: Housewives of New Jersey, Take Note — This Jersey Girl Has Power and Purpose 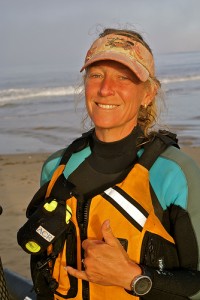 Margo Pellegrino during her Pacific Paddle 2010 (Photos by June Barnard)

New Jersey resident Margo Pellegrino describes herself not a professional athlete, but as an ordinary mother of two. If only all “New Jersey housewives” had her qualities. Since took up paddling outrigger canoes a number of years back and then decided to get out and in her own way, make a difference for the oceans, raising awareness through her paddling. She’s paddled the East Coast, the Gulf Coast, and in 2010, the West Coast of the U.S. Paddling the coasts, especially the West Coast, is not for the faint-hearted, but she does it with a smile and has succeeded in inspiring us and building awareness among many. I caught up with Margo while she and her young son were shoveling snow — not the sidewalk in front of their home, but a public boat ramp so she could get her canoe into the icy water to train!

[pb_slideshow group=”1″]
Photos by June Barnard. See more photos of the 2010 event in her Flickr Photostream

This Week’s Guest is YOU — The Ocean Doctor LIVE! Broadcast

Into the Spill: A House Call to the Gulf – Part 2
0 replies