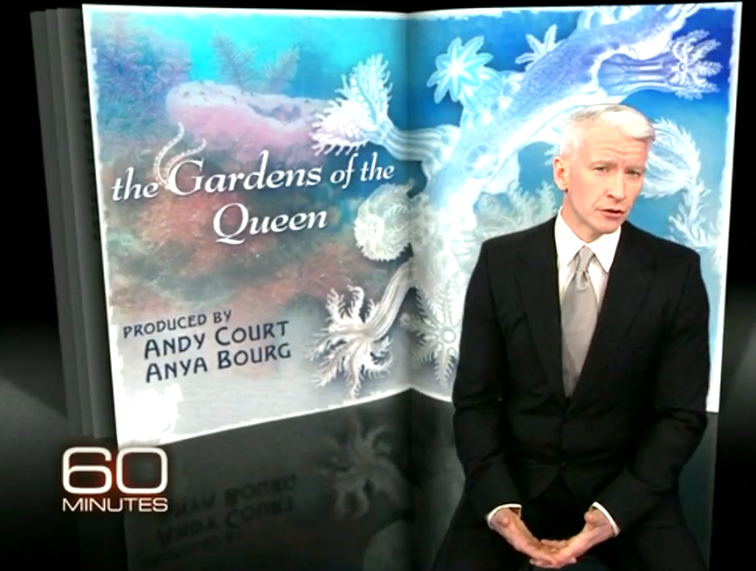 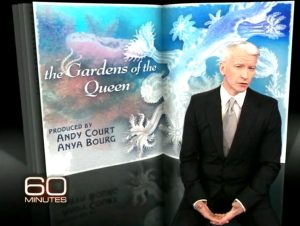 The 60 MINUTES presentation of “The Gardens of the Queen” with Anderson Cooper featuring Cuba’s Jardines de la Reina has been named a finalist in the BLUE Ocean Film Festival 2012, to be held September 24-30, 2012 in Monterey, California. Cooper and the 60 MINUTES team joined Dr. David E. Guggenheim, Senior Fellow and Director of the Cuba Marine Research and Conservation Program at The Ocean Foundation and?Fabi?n Pina Amarg’s of the Cuban Center for Coastal Ecosystem Research, to explore this striking underwater ecosystem. Earlier this year, the 60 MINUTES segment, which originally aired in December 2011, won the 2012 Edward R. Murrow Award for excellence in journalism.

“The Gardens of the Queen” will be screened at BLUE, with an introduction and discussion by Dr. Guggenheim, now in his 12th year working in Cuba, along with the 60 MINUTES producers (invited) and panel of experts focused on the significance of the piece as well as the important roles that marine protected areas play in protecting the world’s ocean ecosystems.

The piece was hosted by Anderson Cooper and produced by Andy Court and Anya Bourg in collaboration with CBS News producer Portia Siegelbaum in Havana. The breathtaking cinematography was captured? Bill Mills (Florida Film & Video) and Chris Everson. The producers’ vision was to tell the story of the global decline in coral reefs, but to do so by showing viewers what a truly healthy reef is supposed to look like, providing an important perspective. Unfortunately, healthy reefs are increasingly difficult to find in the 21st century.

Dr. David E. Guggenheim (L) and Anderson Cooper (R) in the Gardens of the Queen, Cuba

Named by Christopher Columbus to honor Queen Isabel, Jardines de la Reina, or Gardens of the Queen are one of the healthiest coral reef ecosystems remaining in the Caribbean. In a world where coral reefs are dying, the corals in the Gardens of the Queen are flourishing, and like a living time machine, the Gardens likely resemble the healthy coral reefs Columbus saw, avoiding the rapid decline so common throughout the Caribbean and the rest of the world.

In addition to exploring the magnificient wildlife in an exceptionally healthy ecosystem, the program explores what makes this ecosystem so healthy and the implications for coral reefs elsewhere? Scientists believe part of the answer lies in the fact that Cuba established one of the largest protected areas in the Caribbean 15 years ago and former fishermen are now employed (and earn much more) at diving and fishing operations serving visiting ecotourists. Cuba has committed to protecting 25 percent of its ocean ecosystems in protected areas and has eliminated bottom trawling from its waters.

The piece has received international acclaim and more than 18 million viewers tuned in to watch, the highest viewership for 60 MINUTES in years. Given the importance of bringing the public face-to-face with earth’s treasures and the challenges they face, many hope it can serve as a message for the broadcast industry to support this type of programming more broadly, not exclusively on wildlife-oriented cable channels.