RETURN to the Arctic Depths – An Ocean Doctor Special Presentation DeepWorker sub films a giant grenadier at 1,900 feet in the Bering sea

In 2007, Greenpeace launched a groundbreaking expedition to explore the two largest underwater canyons in the world, in the heart of the Bering Sea. It was the first time manned submersibles ever entered these canyons and human eyes gazed directly upon their treasures. The expedition revealed an extraordinary tapestry of life thousands of feet below the surface, including beautiful, brightly-colored deepwater corals, sponges, anemones, octopus and fish and resulted the discovery of new species and species ranges. Five years later, as this is being written, Greenpeace has returned to the Bering Sea and is also exploring the Chukchi Sea with submersibles. This time, concern for these rich coralline ecosystems is not just about fishing. Royal Dutch Shell is making preparations to drill for oil in the Chukchi Sea, and already Greenpeace researchers have revealed rich coral beds in the area in which Shell intends to drill. (See Greenpeace finds deep-sea corals on Shell’s Arctic drill site – Washington Post.) “Attacked by the giant squid’s cousins!” is just one of the many posts and videos you’ll find below

Dr. David E. Guggenheim served as a sub pilot and scientific consultant during the 2007 expedition. Serving then only as his personal blog, OceanDoctor.org was essentially born out of the 2007 expedition. A quirky new site named, “Twitter” offering something called “microblogging” was also used to provide live updates from the ship given limited bandwidth of the satellite connection. OceanDoctor.org covered the unprecedented descent into the unknown, moments of discovery, seasickness, sub pilot diets, squid attacks, and even David’s first tattoo. (Yes, there are photos.)

To celebrate the five year anniversary of the expedition and to enrich the expedition now underway in the Arctic, we have compiled all of the content from the 2007 expedition in once place — on this page below. Several of the posts were later made into videos for what would become Ocean in Google Earth, also posted below. And two episodes of The Ocean Doctor Radio Show focused on the expedition. We also provide links to Greenpeace where you can learn more about both expeditions.

Greenpeace refers to the Bering Sea as “one of the wildest regions in the world.” It supplies fully half the seafood caught in the United States. It’s huge — more than 770,000 square miles — and stretches between Alaska and Russia. But its bounty is not unlimited and the impacts of fishing — especially trawling — can be devastating. We hope you’ll join us on this journey of rediscovery and learn how exploration and conservation go hand in hand. Now we invite you to return to the arctic depths…

Beneath a British Columbian Waterfall

Ginormous is a Word, and Just in Time

When Everything Goes Wrong…and It’s a Good Thing

Choose Nausea or Sleepiness. Or Perhaps You’d Like Both?

Where Condos Fall from the Sky

Attacked by the Giant Squid’s Cousins

A Sea Turtle is Born in Alaska

The Heart of the Bering Sea Beats with Discovery

Featured in the Ocean in Google Earth 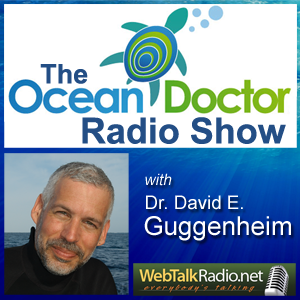 60 MINUTES “The Gardens of the Queen” Named Finalist at BLUE Ocean...