I awakened at 4am in my bunk to something strange. The ship was still. After enduring two days of pounding seas and gale-force winds, we had at last arrived at the island of Unalaska and were nearing the port of Dutch Harbor. A few hours later, juggling my cameras, I tried in vain to capturethe profound tranquility of that early Alaskan morning as dawn’s gentle glow painted small swaths of green across the surrounding mountains atop a canvas of deep blues and grays.An incredible journey was nearing its end, and I was reluctant to let go. So was the wildlife. In a moment, the morning silence was replaced by shrieks from the deck below. They were shrieks of joy as once again we were surrounded by whales as a pod of humpbacks divided itself evenly and passed closely along both sides of us, filling the morning air with their spouts and flukes. 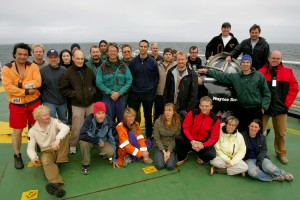 I have always found the end of an expedition a bittersweet experience, and this time was no exception. I knew how once we were docked it would be impossible to recapture the uniqueness of this expedition, this crew, this ship. And sure enough, the real world began to waft in, first the pilot who boarded to guide the ship in. Then the officials at the city dock. Then the onlookers, fascinated with the presence of a rainbow-adorned Greenpeace ship nestled among the commercial fishing vessels and freighters.

We had a pizza party on the helideck and were joined by one of the curious onlookers, a local fisherman wearing a shirt adorned with the phrase, “Young Urban Cod Killers (YUCK).” I was relieved to hear that YUCK existed in name only — no such organization really existed — just good shock value for a t-shirt. But it was a reminder of the way much of the world looks at fish and fishing?and perhaps conservationists. Later at Dutch Harbor Airport, the back of a fisherman’s t-shirt read, “First Come, First Served — Dutch Harbor, Alaska,” bearing a picture of crab with its carapace replaced by a menacing human skull. The slogans convey for the fishing industry the same gold rush mentality and machismo of the Old West. The reality of life on land was returning too quickly. 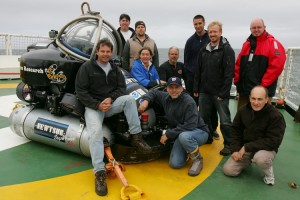 As our pizza party continued into the chilly evening, I looked around in admiration at the crew I had sailed with and my fellow scientists and sub pilots. I had worked a bit with Greenpeace in Washington, DC but really had no idea what to expect upon a Greenpeace ship. What I experienced was a summer among capable and dedicated professionals who worked hard and supported one another. From the Greenpeace staff, crew and volunteers, I heard incredible stories of dedication, passion, and remarkable tenacity. I heard about Greenpeace’s emblematic “actions,” the unfurling of banners, chaining of bodies to earth-moving equipment, and other daring, ingenious, and often provocative measures to draw attention to critical issues worldwide. Such actions seem extreme to some, but as Greenpeace ocean specialist and fellow sub pilot, John Hocevar pointed out, many of the issues that it might have once seemed extreme to protest, such as dumpling nuclear waste in the ocean, now appear plainly wrong to just about everyone. Greenpeace has helped lead the way toward change. 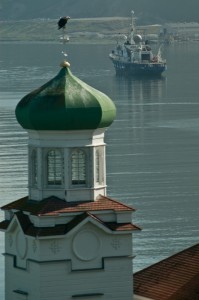 Bald Eagle Atop Dome of Church of the Holy Ascension, Unalaska (Esperanza in Background)

I chatted with Penny, the boatswain, as she smiled and reflected on the expedition while she rolled a cigarette. The expedition represented her second tour as boatswain — her first was in the roiling southern ocean. She’s strong and tough as nails, belying her lean frame and goldilocks, and I marveled at the endless range of tasks she mastered and responsibilities she oversaw. Her gentle hand was often at the controls of the winch during launch and recovery of our subs, and her gentle soul always warmed the room. And there was Kate, a volunteer for the entire summer aboard ship, who gave new meaning to “Dirty Jobs.” Each day she would disappear for some awful task in the bowels of the ship, evidenced to many of us only at meals by the telltale patches of paint and grease that usually adorned her. There was Clive, a physician based in British Columbia, who takes leave from his practice for months to be aboard Esperanza as ship’s doctor and as many other tasks he can tackle.

And there was fellow sub pilot and Greenpeace action unit coordinator in Toronto, Kenneth Lowyck, a man who has retained his toughness and leadership as a keen tactician from his days in the military service, but whose passion for the arts and conservation is truly disarming. Ken told me the incredible story of when he was stationed in the tiny country of Djibouti in East Africa as a diver in the Belgian Marines during the embargo of Iraq leading up to the first Gulf War. At the marketplace he came across an awful sight — a sea turtle for sale, still alive and helplessly writhing on its back atop the pavement. Ken dug into his wallet and purchased the sea turtle from the vendor, hailed a taxi and asked the driver to head to the beach. The driver excitedly shared his favorite sea turtle recipes with Ken during the journey, unaware that this was a mission of mercy. Ken released the sea turtle into gulf, giving it another chance. 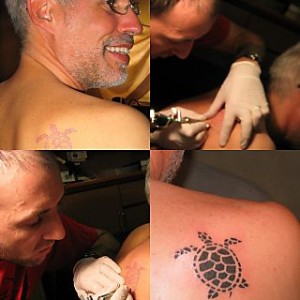 A Sea Turtle is Born in Alaska: Freddie Does His Masterful Work

Perhaps it was Kenneth’s story that ultimately made me do it?I’m not really sure. But something about Esperanza and the very special people aboard her led me to want a very special remembrance, and thankfully second engineer “Freddie” Toia was willing to help. In addition to being a skilled engineer, Freddie is also a talented tattoo artist. And so, aboard Esperanza, a sea turtle was born in Alaska and now lives on my shoulder, my first and only tattoo. She will be with me for the rest of my life, along with my memories of a special ship and its special people.

We spent our remaining days working to engage the community and share what we had learned. The eyes of fishermen and processing plant workers followed our Greenpeace zodiac with scrutiny, anticipation, and perhaps resentment. But I also saw the unmistakable look of respect — respect for an organization with a rich tradition of fighting without apology for what it believes, standing tough, enduring for decades. An organization that held its first protest nearly 40 years ago in these very waters. Beneath the veneer of Dutch Harbor and Unalaska, beyond “Deadliest Catch,” beyond the legions of transient fishermen that pass through this distant outpost, and tucked away from the mountains of crab traps and fishing gear lies a small but cohesive community of houses, schools, and people. 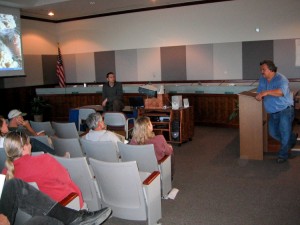 Greenpeace Briefing to Community in Unalaska

We visited with a number of residents in an event led by John Hocevar and Greenpeace oceans campaigner, George Pletnikoff, and we presented the first public showing of the video and images we had collected. The reception was warm and appreciative, and it was moving indeed to watch the faces of these residents marvel at their first glimpse of this never-before-seen part of Alaska, truly part of their home, a part integral to the Bering Sea Ecosystem upon which generations have depended. It was also moving to hear the despair in the room. So many in the community felt helpless against the powerful forces of the large seafood corporations, fishery councils and Washington, DC lobbies. I have heard such despair before, but also know that bottom-up, community-led grassroots efforts represent the best hope for change, and perhaps on that night a seed was planted. 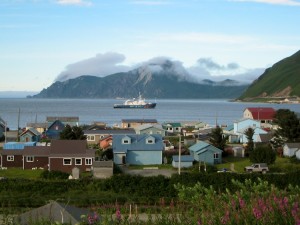 Esperanza at Anchor off of Unalaska Community

Nearly 24 hours late due to Dutch Harbor’s legendary fog, our small plane finally rolled down the runway for the 3-hour flight to Anchorage. As we lifted into the gray mist, I leaned forward and peered intently out the window, straining to catch a glimpse of her. And through the clouds, there she was, her painted rainbow the only dash of color in the bleak, gray rain below. I was elated to see Esperanza one last time, still peacefully at anchor in Unalaska Bay. I sat back in my seat and smiled as I felt the warm pain of my new tattoo on my shoulder. After traveling thousands of miles, sea turtles miraculously return to the same beach where they were born to nest. And I know that some day my sea turtle will find her way back home — to Esperanza — again.

Ginormous Is a Word, and Just in Time
1 reply