The Harte Research Institute for Gulf of Mexico Studies (HRI) at Texas A&M University-Corpus Christi and the University of Havana’s Center for Marine Research (CIM) [Centro de Investigaciones Marinas] are leading a collaborative effort, Proyecto Costa Noroccidental [Project of the Northwest Coast], a comprehensive multi-year research and conservation program for Cuba’s Gulf of Mexico coast. Dr. David E. Guggenheim, president of 1planet1ocean, is a member of HRI’s Advisory Council and also serves as HRI’s Cuba Programs Manager and is co-principal investigator of the project with Dr. Gaspar González Sansón of CIM.

Proyecto Costa Noroccidental is assessing northwestern Cuba’s marine habitats, identifying and describing the principal human uses and threats, providing recommendations for the conservation of the region’s ecosystems, and establishing a framework for long-term cooperative research and monitoring. The project is designed to provide fundamental data on this understudied region of Cuba while also providing new insights regarding biological connectivity and conservation in the Gulf of Mexico and Caribbean. The project is expected to help secure science-based conservation policies in advance of the inevitable wave of development in the region.

Cuba’s northwest coast has not been comprehensively studied, and the results of this project are providing an important advance to the natural sciences in Cuba and conservation of costal ecosystems in the Gulf of Mexico. This research is gaining attention and participation from numerous Cuban institutions and is providing the basis for the research theses and dissertations for 16 students at the project’s lead Cuban institution, the University of Havana’s Centro de Investigaciones Marinas (CIM) [Center for Marine Research], the only Cuban institution where marine scientists are trained. Our understanding of the Gulf increasingly points toward a vast web of linkages throughout the ecosystem, linkages that span international borders. Collaborative scientific research is a permitted activity under the long-standing United States’ economic embargo of Cuba.

Up until now, Cuba’s northwest coast has not experienced the levels of coastal development seen elsewhere on the island, but as the country is now among the world’s fastest growing tourist destinations, there are growing pressures of tourism in the region, accompanied by accelerating impacts from fishing, agriculture, and now, offshore petroleum development.

The project is collecting data on corals and invertebrates, fish populations, and water quality. Ecotoxicological analysis is also being conducted to assess land-based pollution impacts. In 2007, a shark research component will be incorporated, including a planned October 2007 shark tagging expedition. Northwest Cuba has seen a ten-fold reduction in shark landings since the 1960s.

In 2007, in collaboration with several Mexican institutions, the project will include a genetic analysis of Cuban sea turtle populations in order to gain new insight into population dynamics. Also planned for 2007 is a broadening dialogue with Cuban policymakers to make use of the data obtained from this project.

At the December 2006 MARCuba conference in Havana (Cuba’s triennial marine research conference) a total of 22 presented papers and posters were based on the research outcomes of this project. Publication efforts will continue and intensify over the coming year. 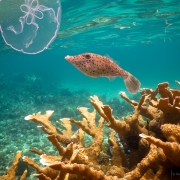 VIDEO: Half the Caribbean’s Coral Reefs Have Died. Join Our Fight to Bring Them Back

A Sea Turtle Is Born in Alaska
3 replies