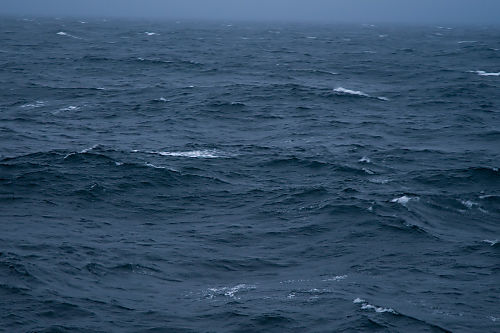 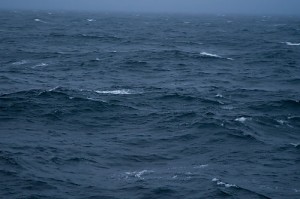 The Bering Sea, with Attitude

Earlier in this blog I’ve confessed my darkest secret as a marine scientist: I get seasick. So my biggest fear of the Bering Sea is what the Bering Sea is fond of doing often — getting rough with the boats that dare to ply its waters. Yesterday, things got a bit rough for the Esperanza. A major front pushed through and seas kicked up from nearly flat to a confused sea state — wind-driven waves 4-5 feet heading one direction, a much larger swell, Penny the boatswain noting swells up to 12 feet, heading at a 45 degree angle. The result made for a rough ride. Awakened at 4am, I dashed up to my hideout, the video editing room, to make sure that our precious data stored inside several hard drives, were secured. I added some bungee to keep things from sliding. I tried to return to sleep, but it was fitful. 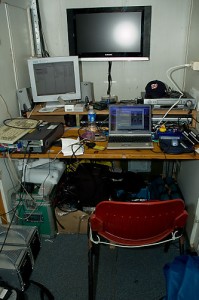 At breakfast, I ate light and looked forward to a productive day of catch up on this blog, web site, data analysis, etc. since dives of any kind were out of the question. Esperanza headed in to St. George Island to pick up Andy Malavansky, head of the St. George Ecological Office, along with fur seal ecologist, Steve Insley. I felt remarkably well given the rockin’ and rollin’, but as the day wore on, I felt more and more exhausted, as did my peers. The constant movement of the ship makes simple tasks much more difficult. For me, working on the computer was especially tough, here in my windowless station, and trying to drop files into the right folder with the mouse became an exercise in eye-hand coordination like playing a video game. Ultimately it took its toll, and I started to feel a bit green. I then had a choice: Take a pill and endure the side-effect of sleepiness, or do nothing and probably lose my lunch.

I had added a new medication to my arsenal of Dramamine and Bonine: Stugeron, recommended by many aboard Esperanza. The directions said to take two initially then one every 8 hours. I took one pill. Initially, I felt great and got back to work. A bit later, I couldn’t keep my eyes open. Nap number one. I awoke for a few hours, stumbled around a bit, then took nap number two. I was so out of it that Timo had to awaken me when I was 30 minutes late to dinner. 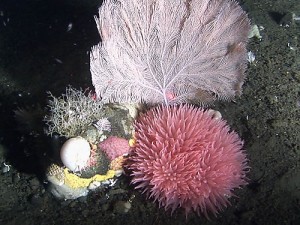 After dinner we gave a brief presentation to the crew of our findings so far — eyes were riveted on the monitor. Ken Lowyck, Greenpeace Action Unit Coordinator in Toronto and I showed a number of clips from our tandem dive to 1,071 feet the previous day where we landed in a beautiful, rich coral habitat. Afterwards I stumbled back into my cabin, and for the first time on the expedition, was in my bunk before my bunkmate, Ruud, who has the 4am-8pm shift. When I awoke for pre-dive this morning, so much sleep made me euphoric, especially with much calmer seas to greet me.

Still photographer Todd Warshaw and I donned our drysuits, along with Dive Master (and fellow sub pilot) Ken Lowyck to capture the deepworker launch from in the water — I’d be shooting HD video. The dive went reasonably well, though my weight belt was somewhat uncooperative, so I left it behind and filmed from the surface. I remembered all my zippers and my dive was comfortable, warm and dry!

As I write this, John and Michelle at about 1,000 feet — I hear the echo of the sonar tracking system from the bridge deck above. I heard John’s voice over the in-water comms indicate he’s made some good collections. And I’m back in my little video editing hole, feeling good, alert, and hungry. But, more bad weather expected on Friday. Not sure if I’ll choose the little white pill again this time…

The Heart of the Bering Sea Beats with Discovery

Beneath the Deadliest Catch: Beauty & Mayhem Under the Bering Sea
1 reply