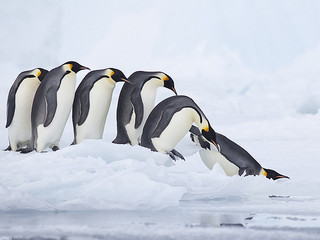 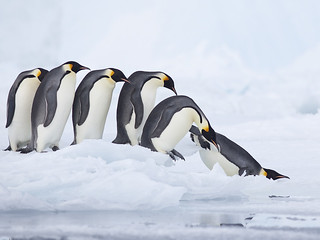 ScienceDaily reports that a study led by researchers from the Woods Hole Oceanographic Institution, published in the June 20th, 2012 edition of the journal Global Change Biology, predicts that as global temperatures continue to rise, penguins in Terre Adelie, in East Antarctica, may eventually disappear. Emperor penguins are perhaps the best-known and most iconic of the Antarctic region and were featured in the popular film, March of the Penguins.

Unlike other sea birds, Emperor penguins breed and raise their young almost exclusively on sea ice. If that ice breaks up and disappears early in the breeding season, massive breeding failure may occur, says Jenouvrier. “As it is, there’s a huge mortality rate just at the breeding stages, because only 50 percent of chicks survive to the end of the breeding season, and then only half of those fledglings survive until the next year,” she says.

Disappearing sea ice may also affect the penguins’ food source. The birds feed primarily on fish, squid, and krill, a shrimplike animal, which in turn feeds on zooplankton and phytoplankton, tiny organisms that grow on the underside of the ice. If the ice goes, Jenouvrier says, so too will the plankton, causing a ripple effect through the food web that may starve the various species that penguins rely on as prey.

The effect of rising temperature in the Antarctic isn’t just a penguin problem, according to Caswell. As sea ice coverage continues to shrink, the resulting changes in the Antarctic marine environment will affect other species, and may affect humans as well.

Most penguin populations around the world are already threatened, impacted heavily by fishing activities that compete for their food, loss of habitat, oil spills and now, climate change.

Aboard the Cape to Cape Expedition: In Shackleton's Footsteps on South Georgia Island