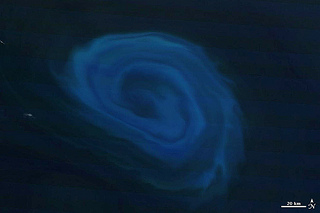 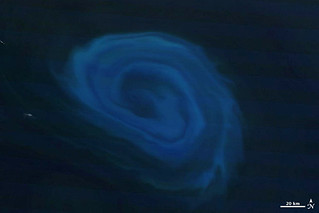 It’s a controversial idea that has been around for decades. Stimulate the growth of phytoplankton (plant plankton) in remote reaches of the oceans by fertilizing the oceans with iron. Previous studies concluded that such an approach would not be effective. However, the recent analysis of a 2004 ocean fertilization experiment in the Southern Ocean — published in the journal, Nature — shows that use of iron fertilization did stimulate the growth of phytoplankton, which sank into the deep sea after the algae died, serving as a “carbon sink” in the deep where the carbon would be held out of the atmosphere for centuries.

In February 2004, researchers involved in the European Iron Fertilization Experiment (EIFEX) fertilized 167 square kilometres of the Southern Ocean with several tonnes of iron sulphate. For 37 days, the team on board the German research vessel Polarstern monitored the bloom and demise of single-cell algae (phytoplankton) in the iron-limited but otherwise nutrient-rich ocean region.

Each atom of added iron pulled at least 13,000 atoms of carbon out of the atmosphere by encouraging algal growth which, through photosynthesis, captures carbon. In a paper in Nature today, the team reports that much of the captured carbon was transported to the deep ocean, where it will remain sequestered for centuries ? a ‘carbon sink’.

?At least half of the bloom was exported to depths greater than 1,000 metres,? says Victor Smetacek, a marine biologist at the Alfred Wegener Institute for Polar and Marine Research in Bremerhaven, Germany, who led the study.

Scaling ocean fertilization up to a viable climate change mitigation strategy is fraught with controversy, however, because such large-scale manipulation of natural ecosystems could have unanticipated and unintended consequences. This includes possible impacts on deep sea ecosystems which are largely unexplored.

Where’s the Oil Now? What’s the Gulf Worth? The Tough Questions, Answered