The Uncertain Future of Fishing in the Gulf

There are 40,000 Vietnamese living and working in Louisiana, Mississippi, and Alabama, and one in three work in the seafood industry. Vietnamese and Southeast Asian fisherman make up one-third of all shrimping vessels in the Gulf Coast. Many also work catching oysters, crabs and packaging seafood. The closure of nearly one-third of federal waters to fishing in the Gulf of Mexico due to the BP oil spill disaster has already had a devastating economic impact on the New Orleans East fishing and seafood services communities. Even as fishing closures are lifted, there is growing concern that the unprecedented level of use of dispersants in the Gulf has resulted in a massive infiltration of toxic substances into the marine food chain. The safety of seafood in the Gulf of Mexico may remain in question for many years, and the viability of the region’s seafood industry is now in question. In addition, oil and dispersants have directly killed numerous fish and other species and may have increased the size of the anoxic ?dead zone? in the Gulf. Thus, even if claims that chemicals in dispersants do not constitute a threat to seafood safety are true, impacts to the Gulf’s productivity may have long-lasting consequences to commercial fishing.

Under the leadership of the MQVN Community Development Corporation (MQVN CDC), a community-driven plan was developed for an innovative urban farm. The Viet Village Urban Farm was designed to improve local food system sustainability while increasing economic opportunities for community members and providing a culturally rich community space. Intended impacts include those on engagement of a traditionally underserved community, economic opportunities, community health, cross-generational interactions, cultural traditions, and protection of natural resources. Objectives include:

Key benefits of the project are to: 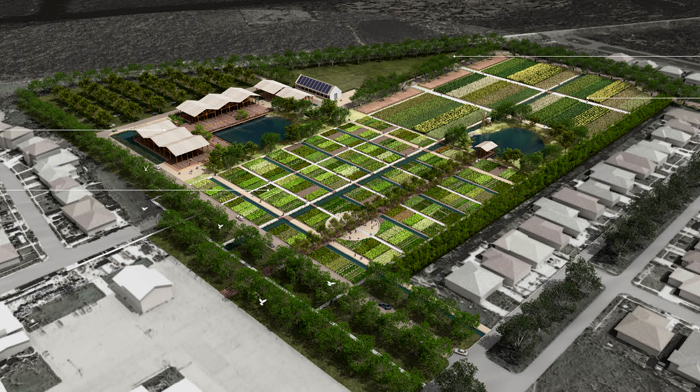 Landscape architect’s rendering of the Viet Village Urban Farm, a 28-acre agriculture project that will build on the community’s cultural strengths ? generations of experience in farming and fishing ? and create new green jobs and businesses while maintaining organic practices and the highest standards of sustainability (Source: Spackman, Mossop+Michaels)

There is increasing recognition that sustainable aquaculture can play a key role in the transition toward safer, more environmentally and economically sustainable seafood production, offering a viable, safe and sustainable alternative to fishing wild stocks and one that can bring strong economic benefits. (See: Rebuilding the Gulf’s Shattered Fishing Industry ? On Land). Land-based, next-generation recirculating aquaculture systems (RAS) offer a unique combination of conservation achievements, socioeconomic benefits, and potential for scalability. Such technology could lead the way toward a revolutionary transition of fish production. A land-based, sustainable aquaculture industry for NOE is envisioned as a component of the community’s proposed Viet Village Urban Farm project and as such, represents an investment in a long-term, profitable, sustainable and green-job-creating industry with significant environmental benefits. In addition, because RAS technology remains under-commercialized in the United States, the Viet Village Urban Farm Sustainable Aquaculture Park has the opportunity to serve as a national aquaculture hub and training center, as a showcase not only of next-generation aquaculture technology, but also of the business model and community-level benefits.

As part of the comprehensive revitalization movement for sustainability and resiliency in Village de l’Est, Viet Village Urban Farm will be an intensively used productive landscape that will include a major produce market, commercial agriculture, and community gardens. These key functions will be supported by a network of green infrastructure and a range of community facilities that encourage the use of the site by everyone in the community.

The farm is designed to be sustainable economically, culturally and environmentally. Agricultural production will follow sustainable and organic practices, energy will be used efficiently and renewable energy sources employed, water will be managed on site, and waste will be composted. The project builds on a long tradition of productive gardening and farming in the Vietnamese community, and combines it with the entrepreneurial spirit and energy of younger generations.

Integrating an Aquaculture Park within the community offers important benefits, including an environmentally sustainable alternative to fishing, reducing pressure on wild fish stocks while offering employment alternatives for displaced fishers and seafood industry workers; a long-term investment in the community versus a short-term public assistance measure; fostering of community self-sufficiency and independence through the development of an enduring, community-friendly industry with strong growth potential, energy independence, and the ability to withstand future hurricanes, oil spills and other catastrophic events; rich socioeconomic community benefits, including green jobs, opportunities for enterprise investment and innovation, the creation of new markets, etc. Aquaculture also offers important synergies with the Urban Farm, including developing the first U.S. production of Vietnamese value-added seafood products to be marketed to the Asian-American community nationally, production of high-quality hydroponic vegetables utilizing fish farm nitrogen waste, and developing alternative (renewable) energy sources.

Two community-based workshops are planned for Fall 2010. The first, a community workshop, will draft a Plan of Action for the community that charts a course for the development of a land-based aquaculture industry. This, along with a site visit to Malaysia to assess real-world case studies of next-generation aquaculture in action, will set the stage for a follow-up workshop of socially-responsible investors to be held in December 2010. By early 2011, with the Plan of Action completed and initial funding identified, the Viet Village Urban Farm Sustainable Aquaculture Park can then advance with the completion of a technical feasibility study, followed by construction and implementation. (Parties interested in participating in the Socially-Responsible Investors Workshop, please contact us for additional information.)

Please help us create a new future for the Gulf and its communities.Your tax-deductible contribution to The Ocean Foundation, the project’s fiscal sponsor, will result in hands-on work that will directly benefit the Gulf of Mexico and the New Orleans East community through this forward-looking project that is designed to help the community help itself. Individuals, foundations and investment firms interested in participating in our Socially-Responsible Investors Workshop in late 2010, please contact us for additional information.

Vietnamese Community Leads New Orleans Towards Clean New Industries (Green for All; May 18, 2010)

Documentary: A Village Called Versailles (PBS; May 2010): In a New Orleans neighborhood called Versailles, a tight-knit group of Vietnamese Americans overcame obstacles to rebuild after Hurricane Katrina, only to have their homes threatened by a new government-imposed toxic landfill. A VILLAGE CALLED VERSAILLES is the empowering story of how the Versailles people, who have already suffered so much in their lifetime, turn a devastating disaster into a catalyst for change and a chance for a better future. This powerful documentary was broadcast on PBS in May 2010 as a part of the Independent Lens series.

What Everyone Should Know About Bottled Water
Scroll to top