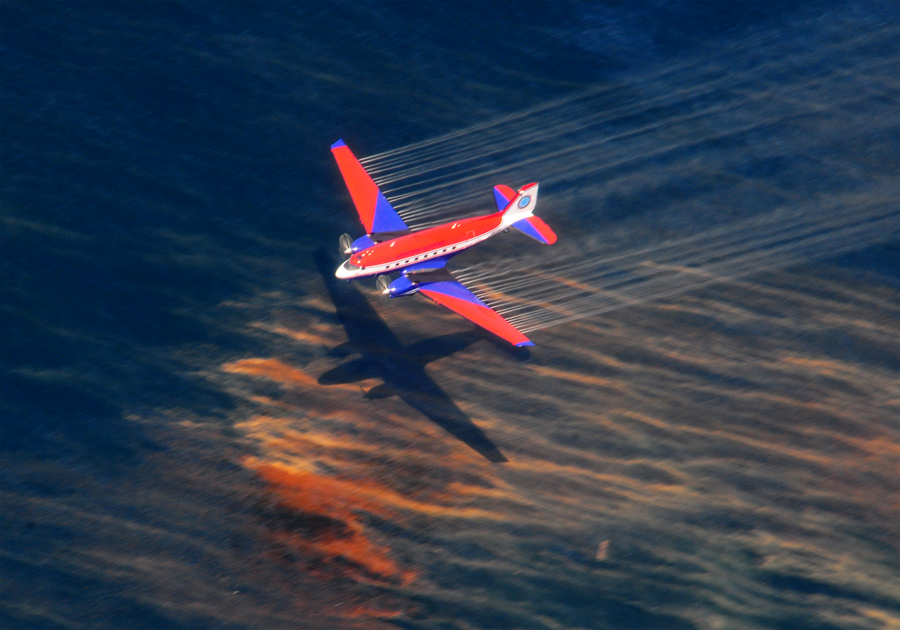 Chemical dispersants being released near Houma, Louisiana in the Gulf of Mexico (USCG photo)

Leading ocean researchers and conservation leaders have issued a joint Consensus Statement calling for the immediate halt of the use of chemical dispersants in the Gulf of Mexico. BP has used nearly two million gallons of Corexit chemical dispersants in the Gulf of Mexico as part of the cleanup effort with support from the U.S. Environmental Protection Agency (EPA). The massive volume of dispersants and the way they have been applied — both on the surface and one mile below the surface — is unprecedented. Once oil is dispersed in deep water, it cannot be recovered.

There has been growing concern about the negative impacts the dispersant/crude oil mix will have on both the marine ecosystem and human health has prompted leading ocean scientists to issue a consensus statement that urges a halt to any further dispersant use in the Gulf.

The statement, authored by Dr. Susan Shaw, Director of the Marine Environmental Research Institute, stands on a large body of research indicating that crude oil and dispersants are more toxic when they are combined than either oil or dispersants alone. The statement also calls for:

The scientists believe the worst impacts of the disaster are yet to come, and without deliberate, independent scientific tracking and assessment, they could remain hidden.

Marine scientists and conservation organizations are invited to add their signatures to the document. Visit the Marine Environmental Research Institute for details.

Members of the public are invited to sign the public petition against the use of chemical dispersants.

Idle fishing boats in Buras, Louisiana. Use of dispersants means more oil has been left in the marine ecosystem, which may ultimately accumulate in fish tissue, leaving an uncertain future for Gulf fisheries.

The rationale behind the use of the dispersant is to keep oil from the sensitive wetlands and coastlines. However, by dispersing the oil throughout the water column, this practice is making it impossible to recover the dispersed oil at the surface while plumes of the dispersed oil remain at depth, entering the food chain at many levels where it will bioaccumulate as it moves up the food chain. Dispersing the oil means more of it will likely travel with prevailing currents to destinations downstream, including Cuba, Mexico, the Florida Keys, and the eastern seaboard of the United States.

At a Senate hearing on June 15, 2010, EPA Administrator, Lisa Jackson stated, “In the use of dispersants we are faced with environmental tradeoffs” but also stated, “The long-term effects [of chemical dispersants] on aquatic life are largely unknown…” Without the critical information needed to make an informed, science-based tradeoff decision, the use of dispersants amounts to a large-scale, uncontrolled experiment on the Gulf of Mexico ecosystem that runs contrary to a precautionary approach, an experiment where the costs may ultimately outweigh the benefits.

Corexit is one of the most toxic dispersants and one of the least effective on Louisiana crude oil. However, it is the mixture of Corexit and oil that represents an even greater threat as the toxic effects are magnified. Corexit, designed to break down lipid layers, facilitates the movement of toxic materials across the membranes of wildlife and human beings. The dispersant-oil mixture is killing marine wildlife, including dolphins, whales and fish, while also causing a range of serious human health effects to those who have been exposed.

At a Senate hearing on June 15, 2010, EPA Administrator, Lisa Jackson stated, ?In the use of dispersants we are faced with environmental tradeoffs.? In fact, the use of dispersants does not represent a science-based, quantifiable ?tradeoff? but rather amounts to a large-scale experiment on the Gulf of Mexico ecosystem that runs contrary to a precautionary approach, an experiment where the costs may ultimately outweigh the benefits.

Into the Spill: A House Call to the Gulf – Part 2
Scroll to top