Cuba’s Northwestern Coast Along the Gulf of Mexico

For the most up-to-date information on the BP Deepwater Horizon oil spill’s potential impacts on Cuba, please visit our special “Cuba at Risk” page.

Since its discovery of oil and natural gas reserves in the Florida straits, Cuba’s preparations for full-scale offshore oil and gas development has raised alarm in the United States, particularly in Florida where it is estimated that much of a catastrophic spill originating in Cuba would be swept by Gulf currents. Ironically, it is now Cuba that faces the threat of a massive oil spill by the United States. The disastrous oil spill from the BP Deepwater Horizon now threatens Cuba, the largest and most biologically diverse island in the Caribbean, due to those same Gulf currents. To make matters worse, the economic embargo imposed upon Cuba by the United States decades ago makes collaboration and coordination exceedingly difficult during this crisis.

For the past decade we have been working with our colleagues at the University of Havana’s Center for Marine Research (Centro de Investigaciones Marinas, CIM) to conduct research and conservation projects in Cuba’s coastal areas. Since 2002, our work has focused in Cuba’s Gulf of Mexico waters where CIM has been conducting the first-ever comprehensive studies of this little-known area. What we are learning is that this region is incredibly rich with healthy corals, fish and serves as critical habitat for imperiled species such as sea turtles, manatees and sharks.

The catastrophic oil spill in the Gulf of Mexico from the BP Deepwater Horizon presents a potentially grave and unprecedented threat to Cuba’s marine life and coastal areas. Not only would this be devastating to Cuba’s marine life, but given the biological connections present in the Gulf of Mexico, such an impact could affect a myriad of species, including fish, sea turtles, dolphins, manatees, sharks, corals inhabiting the waters of the U.S., Mexico and beyond. Currents carry fish larvae from Cuba into U.S. waters, making protection of Cuba’s coastal ecosystems vital to the health of U.S. fish populations.

The primary risk to Cuba comes from the trajectory of the “Loop Current,” a prominent but very variable feature of the Gulf of Mexico. Should the oil become swept up by the swift Loop Current, it could end up in Cuban waters within a matter of days, impacting coastal areas still recovering from the impacts of 2008 hurricanes, Gustav and Ike.

In 2007, a trinational collaboration was formed among the three countries bordering the Gulf of Mexico (Cuba, Mexico and the United States) to elevate collaboration in marine research and conservation to a new level. Sharing of information is central in this collaboration and since the scope of this disaster became evident, our collaboration has mobilized in order to provide our Cuban colleagues with the best information possible in order to plan for potential impacts and deal with them should they occur. A related page on this site has been set up for the purpose of sharing detailed information, including technical reports and satellite imagery and interpretation.
[youtube  EdapdU_Ph3w]

A Blueprint of Collaboration — and Friendship — With Cuba

Expedition to Cuba’s Gulf of Mexico 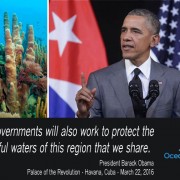 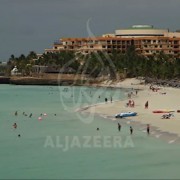 Do You Eat Salmon? Then This is a Must-See: "Farmed Salmon Exposed&quo...Cuba at Risk from Gulf Oil Spill | ExpeditionDispatch from 1planet1ocean (Vol....
Scroll to top