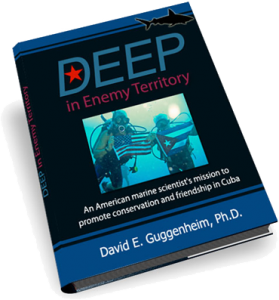 Synopsis: Marine scientist and conservationist Dr. David E. Guggenheim (the “Ocean Doctor”) tells the story of his decade-long effort to bring collaboration in science and conservation between Cuba and the U.S. to a new level. He tells the story against a backdrop of Cold War-era politics, maddening bureaucracy, and the daily challenges of Cuban life while introducing us to Cuba’s unimaginably beautiful underwater ecosystems and the Cuban scientists dedicated to protecting them. His story is timely, illustrating how marine biologists have succeeded where diplomats have failed in bringing the two countries closer together. Deep in Enemy Territory brings a personal, in-depth view of an enchanted yet troubled island that few Americans have seen for half a century.

A portion of profits will support Ocean Doctor.

ANNOUNCEMENT: Travel with Ocean Doctor to Cuba’s Gardens of the Queen!
0 replies

Parrot Fish: The Constant Gardeners of the World’s Reefs