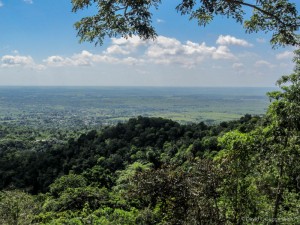 At a rural Cuban elementary school nestled in the verdant mountains west of Havana, I approached the front of the class and queued up my best Spanish. The first-graders looked at me with puzzled anticipation — they don’t see many Americans entering their classroom, let alone U.S. visitors who try to get up and teach. But as soon as it was clear we were going to talk about the oceans, its was all smiles and excited participation, as if salt water is the universal language we all share and treasure.

I told the students that our lesson was about a single word: Orgulloso. It means “proud.” I told the students that they should “sentirse orgulloso” — feel proud, and then I showed them why. Carrying my laptop around the class, I showed recent videos I had taken in Cuba’s pristine ocean waters of healthy corals, sharks, goliath groupers, tarpon and, to especially loud shrieks of delight, sea turtles.

I explained that Cuba had the healthiest coral reef ecosystems remaining in the Caribbean while reluctantly informing them of the fact that the rest of us hadn’t done such a good job of protecting our sea creatures. I told them that they should be proud of what their country has accomplished and its ongoing dedication to protect these amazing places and the animals that inhabit them. A growing number of faculty and the principal had gathered outside the classroom, gazing in through the window, and it was reassuring to see the smiles on their faces, too.

We had lots of excited questions and laughs about sea creatures, and at the end I told them how much we needed bright minds like theirs to continue to protect our oceans in the future. I asked how many of them might be interested in careers in science and marine biology some day, and nearly all of them raised their hands! I promised to return again in 2014 for our next lesson together.

Teaching my first class in Cuba to a group of first graders who love the oceans! (Photo: G. Bucksbaum)

I often joke that if my hair weren’t already silver, it would have become so overnight as an American trying to do research and conservation work in Cuba. It is simultaneously the most gratifying work of my career – and the most frustrating. The Cuban scientists I have been privileged to work with for more than 13 years are remarkable and our work together has made a tremendous impact. But our work is fraught with uncertainties brought about by the economic embargo against Cuba in place for more than half a century, and ever-shifting political winds. Fortunately, we’ve accomplished a lot over the past year.

I have been working with one of Cuba’s few environmental economists, Tamara Figueredo, to plan Cuba’s first-ever series of environmental economics workshops focused on its first marine park, the Gardens of the Queen, featured on 60 Minutes (see https://oceandoctor.org/60minutes).

Gardens of the Queen National Park is the largest fully-protected marine park in the Caribbean and may be the healthiest marine ecosystem left in the Caribbean, seemingly frozen in time as it was when Christopher Columbus first laid eyes on it more than 500 years ago. We’re planning a scientific workshop next year to better understand why this area is so incredibly healthy and what lessons we might learn from this living laboratory to save reefs elsewhere.

Our environmental economics workshop series explores how protecting such areas for ecotourism can be far more economically beneficial than fishing, which has seriously degraded many coral reef ecosystems. Success in the Gardens of the Queen means success throughout many other areas of Cuba, which has made a commitment to protect 25 percent of its coastal waters (compared to around 1 percent for the U.S. and the rest of the world).

We are working to advance renewable energy technologies, including wave-energy buoys, in coastal Caribbean communities

In the spirit of the holidays, I wanted to take this opportunity to reflect and express our thanks for what we have been able to accomplish and individuals like you who have helped us succeed. Our Cuba Conservancy Program has expanded significantly over the past year with bold plans for 2014, engaging Cuban scientists and institutions toward developing innovative solutions for marine conservation and coastal community sustainability challenges.

Our work continues a 13- year foundation of collaborative scientific research, which has helped to train Cuba’s next generation of scientists. The scope and reach of our work is increasing significantly as we are now focused on the socioeconomic dimension of environmental issues, including developing economic tools to value Cuba’s marine resources; developing sustainable, renewable energy sources for coastal communities, including the use of high-tech wave-energy buoys; developing a sustainable aquaculture industry in response to overfishing and climate change; promoting educational & cultural exchanges, including our people-to-people education exchanges initiated in 2013; and “environmental diplomacy, ” leading a new government-to-government dialogue between the U.S. and Cuba, focused on elevating collaboration in marine science and conservation.

Our first documentary, Disaster at Nightingale, premiered in New York and has screened around the world

Our work goes well beyond Cuba, stretching from the South Atlantic to the Bering Sea. We completed our first documentary film, Disaster at Nightingale, which recently premiered at the Wildlife Conservation Film Festival in New York. The film tells the story of the worst environmental disaster I have ever witnessed – a tragic oil spill – in a little-known place in the middle of the South Atlantic called Tristan da Cunha. The film is helping us launch a new project focused on reducing the dangers of marine transportation and helping endangered penguin populations.  In May 2014 we’ll be kicking off much of this effort at the International Oil Spill Conference in Savannah, Georgia. Learn more at: http://DISASTERatNIGHTINGALE.com.

We are also grateful for your ongoing support of our education work, including Ocean Doctor’s “50 Years – 50 States – 50 Speeches Expedition,” a journey to all U.S. states and territories to teach students about the oceans, conservation and careers in science. A few weeks ago, we reached a major milestone in Minnesota, reaching our 19th state and our 20,000th student! Learn more at: http://OceanDoctor.org/50States. We’ll be continuing the Expedition in 2014 with stops in Utah and Colorado in February!

We are continuing our work, led by Greenpeace, to protect the coralline ecosystems of the Bering Sea’s underwater canyons. And we continue to advance sustainable recirculating aquaculture system (RAS) technology as an alternative to fishing wild fish stocks.

Our motto includes the phrase “hands-on conservation.” Here in Washington, DC, there are many voices competing to influence policy. We believe strongly that the most credible voices come from those who draw from first-hand experience. There is no substitute for working locally, side-by-side with those who live there. That’s why three packed bags lie behind me as I write this. Please consider supporting our important “hands-on” work to protect and restore our oceans and educate the next generation of ocean stewards. Your contribution is 100% tax-deductible. You may support us through your donation:

I look forward to continuing our work together. And on behalf of the thousands of students who will get a chance to learn about the oceans, and 20 Cuban first graders who have just learned the importance of the word, orgulloso, please accept my sincerest thanks. Happy New Year!!

A Taste of Cuba | The Explorers Club