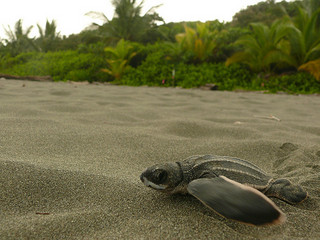 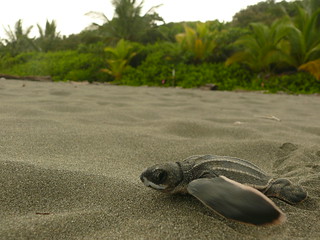 A study published in the April 2012 issue of Ecological Applications uses satellite telemetry data to identify danger zones where sea turtles and fishing trawlers intersect at sea — with deadly consequences. The insights provided by the study will assist regulatory agencies determine limits to fishing, such as seasonal closures, to protect sea turtles, all seven species of which are considered endangered.

The researchers followed 135 females, some from the eastern Pacific and some from the western Pacific, over 15 years as they crisscrossed the ocean hunting for jellyfish. The study found that the migration patterns for the two Pacific populations were different. Western Pacific leatherbacks leave Indonesian nesting sites to feed in the South China Sea, Indonesian seas and southeastern Australia and along the U.S. West Coast, making them vulnerable to fishing nets in many different areas.

The eastern Pacific leatherbacks traveled from nesting sites in Mexico and Costa Rica to the southeastern Pacific, with many getting snagged in fishing gear along the coast of South America. Because the eastern population is more concentrated in range, its risk of extinction is greater, Bailey says.

The new findings could help decision makers plan short-term fishery closures. Bailey credits a recent decision to close a swordfish and thresher shark fishery in California from mid-August to mid-November each year with dramatically reducing leatherback bycatches. (In 2010 no turtles were caught.)